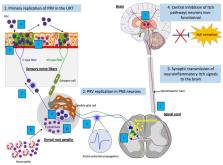 Pseudorabies virus (PRV) is an alphaherpesvirus related to varicella-zoster virus (VZV) and herpes simplex virus type 1 (HSV1). PRV is the causative agent of Aujeskzy’s disease in swine. PRV infects mucosal epithelium and the peripheral nervous system (PNS) of its host where it can establish a quiescent, latent infection. While the natural host of PRV is the swine, a broad spectrum of mammals, including rodents, cats, dogs, and cattle can be infected. Since the nineteenth century, PRV infection is known to cause a severe acute neuropathy, the so called “mad itch” in non-natural hosts, but surprisingly not in swine. In the past, most scientific efforts have been directed to eradicating PRV from pig farms by the use of effective marker vaccines, but little attention has been given to the processes leading to the mad itch. The main objective of this review is to provide state-of-the-art information on the mechanisms governing PRV-induced neuropathic itch in non-natural hosts. We highlight similarities and key differences in the pathogenesis of PRV infections between non-natural hosts and pigs that might explain their distinctive clinical outcomes. Current knowledge on the neurobiology and possible explanations for the unstoppable itch experienced by PRV-infected animals is also reviewed. We summarize recent findings concerning PRV-induced neuroinflammatory responses in mice and address the relevance of this animal model to study other alphaherpesvirus-induced neuropathies, such as those observed for VZV infection.

Alban Latremoliere,  Clifford Woolf (2009)
Central sensitization represents an enhancement in the function of neurons and circuits in nociceptive pathways caused by increases in membrane excitability and synaptic efficacy as well as to reduced inhibition and is a manifestation of the remarkable plasticity of the somatosensory nervous system in response to activity, inflammation, and neural injury. The net effect of central sensitization is to recruit previously subthreshold synaptic inputs to nociceptive neurons, generating an increased or augmented action potential output: a state of facilitation, potentiation, augmentation, or amplification. Central sensitization is responsible for many of the temporal, spatial, and threshold changes in pain sensibility in acute and chronic clinical pain settings and exemplifies the fundamental contribution of the central nervous system to the generation of pain hypersensitivity. Because central sensitization results from changes in the properties of neurons in the central nervous system, the pain is no longer coupled, as acute nociceptive pain is, to the presence, intensity, or duration of noxious peripheral stimuli. Instead, central sensitization produces pain hypersensitivity by changing the sensory response elicited by normal inputs, including those that usually evoke innocuous sensations. In this article, we review the major triggers that initiate and maintain central sensitization in healthy individuals in response to nociceptor input and in patients with inflammatory and neuropathic pain, emphasizing the fundamental contribution and multiple mechanisms of synaptic plasticity caused by changes in the density, nature, and properties of ionotropic and metabotropic glutamate receptors.

IL-6 in inflammation, immunity, and disease.

Toshio Tanaka,  Masashi Narazaki,  Tadamitsu Kishimoto (2014)
Interleukin 6 (IL-6), promptly and transiently produced in response to infections and tissue injuries, contributes to host defense through the stimulation of acute phase responses, hematopoiesis, and immune reactions. Although its expression is strictly controlled by transcriptional and posttranscriptional mechanisms, dysregulated continual synthesis of IL-6 plays a pathological effect on chronic inflammation and autoimmunity. For this reason, tocilizumab, a humanized anti-IL-6 receptor antibody was developed. Various clinical trials have since shown the exceptional efficacy of tocilizumab, which resulted in its approval for the treatment of rheumatoid arthritis and juvenile idiopathic arthritis. Moreover, tocilizumab is expected to be effective for other intractable immune-mediated diseases. In this context, the mechanism for the continual synthesis of IL-6 needs to be elucidated to facilitate the development of more specific therapeutic approaches and analysis of the pathogenesis of specific diseases.

Christoph J Hengartner,  Lisa E. Pomeranz,  Louise E. Reynolds (2005)
Pseudorabies virus (PRV) is a herpesvirus of swine, a member of the Alphaherpesvirinae subfamily, and the etiological agent of Aujeszky's disease. This review describes the contributions of PRV research to herpesvirus biology, neurobiology, and viral pathogenesis by focusing on (i) the molecular biology of PRV, (ii) model systems to study PRV pathogenesis and neurovirulence, (iii) PRV transsynaptic tracing of neuronal circuits, and (iv) veterinary aspects of pseudorabies disease. The structure of the enveloped infectious particle, the content of the viral DNA genome, and a step-by-step overview of the viral replication cycle are presented. PRV infection is initiated by binding to cellular receptors to allow penetration into the cell. After reaching the nucleus, the viral genome directs a regulated gene expression cascade that culminates with viral DNA replication and production of new virion constituents. Finally, progeny virions self-assemble and exit the host cells. Animal models and neuronal culture systems developed for the study of PRV pathogenesis and neurovirulence are discussed. PRV serves asa self-perpetuating transsynaptic tracer of neuronal circuitry, and we detail the original studies of PRV circuitry mapping, the biology underlying this application, and the development of the next generation of tracer viruses. The basic veterinary aspects of pseudorabies management and disease in swine are discussed. PRV infection progresses from acute infection of the respiratory epithelium to latent infection in the peripheral nervous system. Sporadic reactivation from latency can transmit PRV to new hosts. The successful management of PRV disease has relied on vaccination, prevention, and testing.