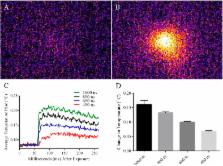 The mechanism(s) responsible for the breakdown (nanoporation) of cell plasma membranes after nanosecond pulse (nsEP) exposure remains poorly understood. Current theories focus exclusively on the electrical field, citing electrostriction, water dipole alignment and/or electrodeformation as the primary mechanisms for pore formation. However, the delivery of a high-voltage nsEP to cells by tungsten electrodes creates a multitude of biophysical phenomena, including electrohydraulic cavitation, electrochemical interactions, thermoelastic expansion, and others. To date, very limited research has investigated non-electric phenomena occurring during nsEP exposures and their potential effect on cell nanoporation. Of primary interest is the production of acoustic shock waves during nsEP exposure, as it is known that acoustic shock waves can cause membrane poration (sonoporation). Based on these observations, our group characterized the acoustic pressure transients generated by nsEP and determined if such transients played any role in nanoporation. In this paper, we show that nsEP exposures, equivalent to those used in cellular studies, are capable of generating high-frequency (2.5 MHz), high-intensity (>13 kPa) pressure transients. Using confocal microscopy to measure cell uptake of YO-PRO®-1 (indicator of nanoporation of the plasma membrane) and changing the electrode geometry, we determined that acoustic waves alone are not responsible for poration of the membrane.

Gail ter Haar (2015)
Therapeutic applications of ultrasound predate its use in imaging. A range of biological effects can be induced by ultrasound, depending on the exposure levels used. At low levels, beneficial, reversible cellular effects may be produced, whereas at high intensities instantaneous cell death is sought. Therapy ultrasound can therefore be broadly divided into "low power" and "high power" applications. The "low power" group includes physiotherapy, fracture repair, sonophoresis, sonoporation and gene therapy, whereas the most common use of "high power" ultrasound in medicine is probably now high intensity focused ultrasound. Therapeutic effect through the intensity spectrum is obtained by both thermal and non-thermal interaction mechanisms. At low intensities, acoustic streaming is likely to be significant, but at higher levels, heating and acoustic cavitation will predominate. While useful therapeutic effects are now being demonstrated clinically, the mechanisms by which they occur are often not well understood.

Mechanisms of cell membrane electropermeabilization: a minireview of our present (lack of ?) knowledge.

J Teissie,  M Golzio,  M. P. Rols (2005)
Cell electropulsation is routinely used in cell Biology for protein, RNA or DNA transfer. Its clinical applications are under development for targeted drug delivery and gene therapy. Nevertheless, the molecular mechanisms supporting the induction of permeabilizing defects in the membrane assemblies remain poorly understood. This minireview describes the present state of the investigations concerning the different steps in the reversible electropermeabilization process. The different hypotheses, which were proposed to give a molecular description of the membrane events, are critically discussed. Other possibilities are then given. The need for more basic research on the associated loss of cohesion of the membrane appears as a conclusion.

T Bettinger,  Stephen Newman (2007)
Ultrasound exposure (USE) in the presence of microbubbles (MCB) (e.g. contrast agents used to enhance ultrasound imaging) increases plasmid transfection efficiency in vitro by several orders of magnitude. Formation of short-lived pores in the plasma membrane ('sonoporation'), up to 100 nm in effective diameter lasting a few seconds, is implicated as the dominant mechanism, associated with acoustic cavitation. Ultrasound enhanced gene transfer (UEGT) has also been successfully achieved in vivo, with reports of spatially restricted and therapeutically relevant levels of transgene expression. Loading MCB with nucleic acids and/or disease-targeting ligands may further improve the efficiency and specificity of UEGT such that clinical testing becomes a realistic prospect.