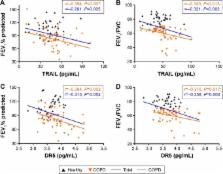 Chronic obstructive pulmonary disease (COPD) is associated with abnormal systemic inflammation, and apoptosis is one of the pathogenic mechanisms of COPD. Several studies have suggested that tumor necrosis factor-related apoptosis-inducing ligand (TRAIL) and its receptors were not only involved in diseases associated with apoptosis but also in inflammatory diseases. However, limited data about the possible relationship between COPD and TRAIL/TRAIL-receptors are available.

To evaluate the potential relationship between TRAIL/TRAIL-receptors and COPD.

Our results suggested that circulating TRAIL and DR5 increased in COPD patients and were associated with lung function and systemic inflammation in COPD. Future studies are needed to verify whether and how TRAIL and its receptors play roles in COPD.

Role of apoptosis in the pathogenesis of COPD and pulmonary emphysema

Ingel Demedts,  Tine Demoor,  Ken R. Bracke … (2006)
Chronic obstructive pulmonary disease (COPD) is characterised by chronic inflammation of the airways and progressive destruction of lung parenchyma, a process that in most cases is initiated by cigarette smoking. Several mechanisms are involved in the development of the disease: influx of inflammatory cells into the lung (leading to chronic inflammation of the airways), imbalance between proteolytic and anti-proteolytic activity (resulting in the destruction of healthy lung tissue) and oxidative stress. Recently, an increasing number of data suggest a fourth important mechanism involved in the development of COPD: apoptosis of structural cells in the lung might possibly be an important upstream event in the pathogenesis of COPD. There is an increase in apoptotic alveolar epithelial and endothelial cells in the lungs of COPD patients. Since this is not counterbalanced by an increase in proliferation of these structural cells, the net result is destruction of lung tissue and the development of emphysema. Data from animal models suggest a role for Vascular Endothelial Growth Factor (VEGF) in the induction of apoptosis of structural cells in the lung. Other mediators of apoptosis, such as caspase-3 and ceramide, could be interesting targets to prevent apoptosis and the development of emphysema. In this review, recent data on the role of apoptosis in COPD from both animal models as well as from studies on human subjects will be discussed. The aim is to provide an up to date summary on the increasing knowledge on the role of apoptosis in COPD and pulmonary emphysema.

C-reactive protein in patients with COPD, control smokers and non-smokers.

Aguinaldo Pinto,  B Celli,  H Müllerova … (2005)
Patients with chronic obstructive pulmonary disease (COPD) have raised serum levels of C reactive protein (CRP). This may be related directly to COPD and its associated systemic inflammation or secondary to other factors such as concomitant ischaemic heart disease (IHD) or smoking status. The aim of this study was to evaluate IHD and smoking as potential causes of raised CRP levels in COPD and to test the association between inhaled corticosteroid (ICS) use and serum CRP levels. Cross sectional analyses comparing cohorts of 88 patients with COPD, 33 smokers (S), and 38 non-smoker (NS) controls were performed. Clinical assessments included a complete medical history, pulmonary function, 6 minute walk test (6MWT), cardiopulmonary exercise test, and high sensitivity serum CRP measurements. Serum CRP levels were significantly higher in patients with COPD (5.03 (1.51) mg/l) than in controls (adjusted odds ratio 9.51; 95% confidence interval 2.97 to 30.45) but were similar in the two control groups (S: 2.02 (1.04) mg/l; NS: 2.24 (1.04) mg/l). There was no clinical or exercise evidence of unstable IHD in any of the subjects. CRP levels were lower in COPD patients treated with ICS than in those not treated (3.7 (3.0) mg/l v 6.3 (3.6) mg/l); this association was confirmed in an adjusted regression model (p<0.05). CRP levels are raised in COPD patients without clinically relevant IHD and independent of cigarette smoking, and reduced in patients with COPD using ICS. CRP may be a systemic marker of the inflammatory process that occurs in patients with COPD.

Natalia K Hofmann,  N Holler,  Carina Thomé … (1997)
TRAIL induces apoptosis through two closely related receptors, TRAIL-R1 (DR4) and TRAIL-R2 (DR5). Here we show that TRAIL-R1 can associate with TRAIL-R2, suggesting that TRAIL may signal through heteroreceptor signaling complexes. Both TRAIL receptors bind the adaptor molecules FADD and TRADD, and both death signals are interrupted by a dominant negative form of FADD and by the FLICE-inhibitory protein FLIP. The recruitment of TRADD may explain the potent activation of NF-kappaB observed by TRAIL receptors. Thus, TRAIL receptors can signal both death and gene transcription, functions reminiscent of those of TNFR1 and TRAMP, two other members of the death receptor family.