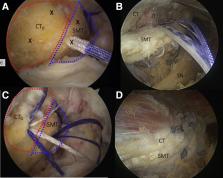 Proximal hamstring injuries are common, and open surgical repair with suture anchors has been the gold standard when surgical intervention is warranted. Endoscopic techniques offer the opportunity of surgical repair with smaller incisions to limit complications and expedite rehabilitation. The purpose of this technique guide is to describe a modified endoscopic technique that allows a safe and anatomic repair of proximal hamstring injuries. The patient is positioned prone with the feet at the head of the bed, table in reverse Trendelenburg, and knees flexed to 90°. Four portals are used, 3 in horizontal alignment within the gluteal fold and 1 directly superior to the ischial tuberosity. The sciatic nerve is identified, dissected, and mobilized away from the operative field. Retraction sutures help retract the gluteus maximus and further protect the sciatic nerve. Dissection is within the interval between the conjoint and semimembranosus tendons. The tendons are freed and mobilized, the ischial tuberosity is decorticated, and an anatomic repair is performed via 4 suture anchors, 2 at each tendon footprint. Advancements in arthroscopy have permitted adequate visualization and exposure of the hamstring footprint, thus allowing for an anatomic repair with increased protection of the sciatic nerve and decreased resources and cost.

George Koulouris,  David Connell (2003)
To evaluate the imaging findings following acute hamstring injury. We retrospectively reviewed the imaging findings of hamstring muscle complex (HMC) strain in 170 patients referred to our institution over a 3-year period. A total of 179 injuries to the HMC were demonstrated in 170 patients (154 male, 16 female, mean age 28.2 years). The mean duration of symptoms was 4.7 days (range 1-10 days). MR imaging was performed in 97 cases and sonography in 102 cases (both modalities were performed in 20 examinations). Attention was directed to the frequency of muscle involvement, the location of the injury within the muscle-tendon unit, the extent of the injury and discriminating avulsion from muscle injury. Twenty-one patients had proximal tendon injury, with sixteen avulsions and five partial tears. Sixteen of these patients had surgical confirmation of hamstring avulsion from the ischial tuberosity (14 conjoint, 2 biceps femoris alone) and all were reliably diagnosed with MR imaging (16/16), but less so with sonography (7/12). Four distal tendon avulsions were also observed (three semitendinosus, one biceps femoris). With respect to muscle injury, the biceps femoris was most commonly injured (124/154). Semimembranosus was an uncommon muscle injury (21/154) and semitendinosus rare (9/154). Imaging can discriminate a hamstring tendon avulsion from musculotendinous strain and helps identify which patients necessitate surgical management as opposed to conservative treatment.

Steven Cohen,  James Bradley (2007)
Hamstring strain is common in athletes, and both diagnosis and surgical treatment of this injury are becoming more common. Nonsurgical treatment of complete ruptures has resulted in complications such as muscle weakness and sciatic neuralgia. Surgical treatment recently has been advocated to repair the complete rupture of the hamstring tendons from the ischial tuberosity. Surgical repair involves a transverse incision in the gluteal crease, protection of the sciatic nerve, mobilization of the ruptured tendons, and repair to the ischial tuberosity with the use of suture anchors. Reports in the literature of surgical treatment of proximal hamstring rupture are few, and most series have had a relatively small number of patients. Surgical repair results project 58% to 85% rate of return to function and sports activity, near normal strength, and decreased pain.