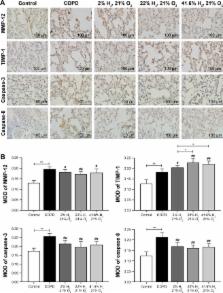 Chronic obstructive pulmonary disease (COPD) is a progressive pulmonary disease caused by harmful gases or particles. Recent studies have shown that 2% hydrogen or hydrogen water is effective in the treatment and prevention of a variety of diseases. This study investigated the beneficial effects and the possible mechanisms of different hydrogen concentrations on COPD.

These results suggest that hydrogen inhalation slows the development of COPD-like lung disease in a cigarette smoke-induced rat model. Higher concentrations of hydrogen may represent a more effective way for the rat model.

Nino Kuenzli,  Dirkje S. Postma,  John R. Balmes … (2010)
Although cigarette smoking is the most important cause of chronic obstructive pulmonary disease (COPD), a substantial proportion of COPD cases cannot be explained by smoking alone. To evaluate the risk factors for COPD besides personal cigarette smoking. We constituted an ad hoc subcommittee of the American Thoracic Society Environmental and Occupational Health Assembly. An international group of members was invited, based on their scientific expertise in a specific risk factor for COPD. For each risk factor area, the committee reviewed the literature, summarized the evidence, and developed conclusions about the likelihood of it causing COPD. All conclusions were based on unanimous consensus. The population-attributable fraction for smoking as a cause of COPD ranged from 9.7 to 97.9%, but was less than 80% in most studies, indicating a substantial burden of disease attributable to nonsmoking risk factors. On the basis of our review, we concluded that specific genetic syndromes and occupational exposures were causally related to the development of COPD. Traffic and other outdoor pollution, secondhand smoke, biomass smoke, and dietary factors are associated with COPD, but sufficient criteria for causation were not met. Chronic asthma and tuberculosis are associated with irreversible loss of lung function, but there remains uncertainty about whether there are important phenotypic differences compared with COPD as it is typically encountered in clinical settings. In public health terms, a substantive burden of COPD is attributable to risk factors other than smoking. To prevent COPD-related disability and mortality, efforts must focus on prevention and cessation of exposure to smoking and these other, less well-recognized risk factors.

Yin Yin Chen,  Philip Thai,  Yu-Hua Zhao … (2003)
Mucus hypersecretion and persistent airway inflammation are common features of various airway diseases, such as asthma, chronic obstructive pulmonary disease, and cystic fibrosis. One key question is: does the associated airway inflammation in these diseases affect mucus production? If so, what is the underlying mechanism? It appears that increased mucus secretion results from increased mucin gene expression and is also frequently accompanied by an increased number of mucous cells (goblet cell hyperplasia/metaplasia) in the airway epithelium. Many studies on mucin gene expression have been directed toward Th2 cytokines such as interleukin (IL)-4, IL-9, and IL-13 because of their known pathophysiological role in allergic airway diseases such as asthma. However, the effect of these cytokines has not been definitely linked to their direct interaction with airway epithelial cells. In our study, we treated highly differentiated cultures of primary human tracheobronchial epithelial (TBE) cells with a panel of cytokines (interleukin-1alpha, 1beta, 2, 3, 4, 5, 6, 7, 8, 9, 10, 11, 12, 13, 15, 16, 17, 18, and tumor necrosis factor alpha). We found that IL-6 and IL-17 could stimulate the mucin genes, MUC5B and MUC5AC. The Th2 cytokines IL-4, IL-9, and IL-13 did not stimulate MUC5AC or MUC5B in our experiments. A similar stimulation of MUC5B/Muc5b expression by IL-6 and IL-17 was demonstrated in primary monkey and mouse TBE cells. Further investigation of MUC5B expression demonstrated that IL-17's effect is at least partly mediated through IL-6 by a JAK2-dependent autocrine/paracrine loop. Finally, evidence is presented to show that both IL-6 and IL-17 mediate MUC5B expression through the ERK signaling pathway.

Melba Muñoz,  Markus M. Heimesaat,  Kerstin Danker … (2009)
Peroral infection with Toxoplasma gondii leads to the development of small intestinal inflammation dependent on Th1 cytokines. The role of Th17 cells in ileitis is unknown. We report interleukin (IL)-23–mediated gelatinase A (matrixmetalloproteinase [MMP]-2) up-regulation in the ileum of infected mice. MMP-2 deficiency as well as therapeutic or prophylactic selective gelatinase blockage protected mice from the development of T. gondii–induced immunopathology. Moreover, IL-23–dependent up-regulation of IL-22 was essential for the development of ileitis, whereas IL-17 was down-regulated and dispensable. CD4+ T cells were the main source of IL-22 in the small intestinal lamina propria. Thus, IL-23 regulates small intestinal inflammation via IL-22 but independent of IL-17. Gelatinases may be useful targets for treatment of intestinal inflammation.