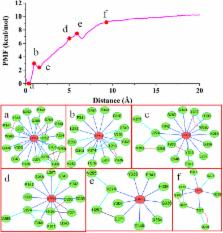 SETD7 is associated with multiple diseases related signaling pathways. (R)-PFI-2 is the first SETD7 inhibitor with nanomolar inhibitory potency. The activity of (R)-PFI-2 is about 500 times over that of (S)-PFI-2. Understanding the mechanism behind this difference will be helpful to discovery and design of more potent SETD7 inhibitors. A computational study combining molecular dynamics simulation, binding free energy calculations, and residue interaction network (RIN) was performed on the (S)-PFI-2/SETD7 and (R)-PFI-2/SETD7 complexes to explore the molecular mechanism behind the different inhibition activity. The results from Molecular Mechanics/Generalized Born Surface Area (MM/GBSA) calculation show (R)-PFI-2 has lower binding free energy. Residues H252, D256, L267, Y335, G336 and H339 are responsible for the binding of SETD7 to the (R)-PFI-2. RIN analysis indicates van der Waals interaction is critical for the binding of (R)-PFI-2. The results from adaptive basing force (ABF) simulation confirm that the free energy barrier of (R)-PFI-2 dissociating from the SETD7 is larger than that of (S)-PFI-2. (S)-PFI-2 and (R)-PFI-2 dissociate from the SETD7 binding site along different reaction coordinate and have potential mean of force (PMF) depth. Our simulations results will be useful to understand molecular mechanism of activity difference between PFI-2 enantiomers against SETD7.

Sharad Verma, Xinrong Tian, Louis V LaFrance … (2012)
The histone H3-lysine 27 (H3K27) methyltransferase EZH2 plays a critical role in regulating gene expression, and its aberrant activity is linked to the onset and progression of cancer. As part of a drug discovery program targeting EZH2, we have identified highly potent, selective, SAM-competitive, and cell-active EZH2 inhibitors, including GSK926 (3) and GSK343 (6). These compounds are small molecule chemical tools that would be useful to further explore the biology of EZH2.

Tingjun Hou, Sheng Tian, Youyong Li … (2014)
By using different evaluation strategies, we systemically evaluated the performance of Molecular Mechanics/Generalized Born Surface Area (MM/GBSA) and Molecular Mechanics/Poisson-Boltzmann Surface Area (MM/PBSA) methodologies based on more than 1800 protein-ligand crystal structures in the PDBbind database. The results can be summarized as follows: (1) for the one-protein-family/one-binding-ligand case which represents the unbiased protein-ligand complex sampling, both MM/GBSA and MM/PBSA methodologies achieve approximately equal accuracies at the interior dielectric constant of 4 (with rp = 0.408 ± 0.006 of MM/GBSA and rp = 0.388 ± 0.006 of MM/PBSA based on the minimized structures); while for the total dataset (1864 crystal structures), the overall best Pearson correlation coefficient (rp = 0.579 ± 0.002) based on MM/GBSA is better than that of MM/PBSA (rp = 0.491 ± 0.003), indicating that biased sampling may significantly affect the accuracy of the predicted result (some protein families contain too many instances and can bias the overall predicted accuracy). Therefore, family based classification is needed to evaluate the two methodologies; (2) the prediction accuracies of MM/GBSA and MM/PBSA for different protein families are quite different with rp ranging from 0 to 0.9, whereas the correlation and ranking scores (an averaged rp/rs over a list of protein folds and also representing the unbiased sampling) given by MM/PBSA (rp-score = 0.506 ± 0.050 and rs-score = 0.481 ± 0.052) are comparable to those given by MM/GBSA (rp-score = 0.516 ± 0.047 and rs-score = 0.463 ± 0.047) at the fold family level; (3) for the overall prediction accuracies, molecular dynamics (MD) simulation may not be quite necessary for MM/GBSA (rp-minimized = 0.579 ± 0.002 and rp-1ns = 0.564 ± 0.002), but is needed for MM/PBSA (rp-minimized = 0.412 ± 0.003 and rp-1ns = 0.491 ± 0.003). However, for the individual systems, whether to use MD simulation is depended. (4) both MM/GBSA and MM/PBSA may be unable to give successful predictions for the ligands with high formal charges, with the Pearson correlation coefficient ranging from 0.621 ± 0.003 (neutral ligands) to 0.125 ± 0.142 (ligands with a formal charge of 5). Therefore, it can be summarized that, although MM/GBSA and MM/PBSA perform similarly in the unbiased dataset, for the currently available crystal structures in the PDBbind database, compared with MM/GBSA, which may be used in multi-target comparisons, MM/PBSA is more sensitive to the investigated systems, and may be more suitable for individual-target-level binding free energy ranking. This study may provide useful guidance for the post-processing of docking based studies.

Jonathan M. Levitt, Nicole P Stern, C. Sander (1985)
We have developed a new method for modelling protein dynamics using normal-mode analysis in internal co-ordinates. This method, normal-mode dynamics, is particularly well suited for modelling collective motion, makes possible direct visualization of biologically interesting modes, and is complementary to the more time-consuming simulation of molecular dynamics trajectories. The essential assumption and limitation of normal-mode analysis is that the molecular potential energy varies quadratically. Our study starts with energy minimization of the X-ray co-ordinates with respect to the single-bond torsion angles. The main technical task is the calculation of second derivative matrices of kinetic and potential energy with respect to the torsion angle co-ordinates. These enter into a generalized eigenvalue problem, and the final eigenvalues and eigenvectors provide a complete description of the motion in the basic 0.1 to 10 picosecond range. Thermodynamic averages of amplitudes, fluctuations and correlations can be calculated efficiently using analytical formulae. The general method presented here is applied to four proteins, trypsin inhibitor, crambin, ribonuclease and lysozyme. When the resulting atomic motion is visualized by computer graphics, it is clear that the motion of each protein is collective with all atoms participating in each mode. The slow modes, with frequencies of below 10 cm-1 (a period of 3 ps), are the most interesting in that the motion in these modes is segmental. The root-mean-square atomic fluctuations, which are dominated by a few slow modes, agree well with experimental temperature factors (B values). The normal-mode dynamics of these four proteins have many features in common, although in the larger molecules, lysozyme and ribonuclease, there is low frequency domain motion about the active site.