Low Neurotoxicity of ONX-0914 Supports the Idea of Specific Immunoproteasome Inhibition as a Side-Effect-Limiting, Therapeutic Strategy 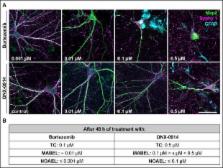 Application of the proteasome inhibitor Bortezomib for the treatment of haematopoietic malignancies such as multiple myeloma significantly improves the average overall survival of patients. However, one of the most severe side effects is the development of peripheral neuropathies caused by neurotoxic effects of Bortezomib limiting its therapeutic efficacy. With ONX-0914 a specific inhibitor of the β5i (LMP7)-immunosubunit containing proteasomes was developed that targets exclusively the proteasome subtypes mainly expressed in immune cells including B lymphocytes as the origin of multiple myeloma. Furthermore, immunosubunitspecific inhibitors have been shown to be promising tools for the therapy of autoimmune disorders. In the presented study, we analysed the concentration-dependent impact of both inhibitors on primary neurons regarding survival rate, morphological changes, and overall viability. Our results clearly demonstrate that ONX-0914, compared to Bortezomib, is less neurotoxic suggesting its potential as a putative antineoplastic drug and as a candidate for the treatment of autoimmune disorders affecting the peripheral and/or central nervous system.

Phosphorylation of NF-kappaB and IkappaB proteins: implications in cancer and inflammation.