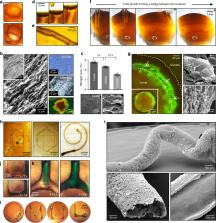 Supramolecular chemistry offers an exciting opportunity to assemble materials with molecular precision. However, there remains an unmet need to turn molecular self-assembly into functional materials and devices. Harnessing the inherent properties of both disordered proteins and graphene oxide (GO), we report a disordered protein-GO co-assembling system that through a diffusion-reaction process and disorder-to-order transitions generates hierarchically organized materials that exhibit high stability and access to non-equilibrium on demand. We use experimental approaches and molecular dynamics simulations to describe the underlying molecular mechanism of formation and establish key rules for its design and regulation. Through rapid prototyping techniques, we demonstrate the system’s capacity to be controlled with spatio-temporal precision into well-defined capillary-like fluidic microstructures with a high level of biocompatibility and, importantly, the capacity to withstand flow. Our study presents an innovative approach to transform rational supramolecular design into functional engineering with potential widespread use in microfluidic systems and organ-on-a-chip platforms.

Self-organising systems have huge potential in device design and fabrication; however, demonstrations of this are limited. Here, the authors report on a combination of disordered proteins and graphene oxide which allows spatio-temporal patterning and demonstrate the fabrication of microfluidic devices.

Intrinsically unstructured proteins and their functions.

Peter E. Wright,  H Dyson (2005)
Many gene sequences in eukaryotic genomes encode entire proteins or large segments of proteins that lack a well-structured three-dimensional fold. Disordered regions can be highly conserved between species in both composition and sequence and, contrary to the traditional view that protein function equates with a stable three-dimensional structure, disordered regions are often functional, in ways that we are only beginning to discover. Many disordered segments fold on binding to their biological targets (coupled folding and binding), whereas others constitute flexible linkers that have a role in the assembly of macromolecular arrays.

Andrea C Ferrari,  Francesco Bonaccorso,  Vladimir I Fal'ko … (2015)
We present the science and technology roadmap for graphene, related two-dimensional crystals, and hybrid systems, targeting an evolution in technology, that might lead to impacts and benefits reaching into most areas of society. This roadmap was developed within the framework of the European Graphene Flagship and outlines the main targets and research areas as best understood at the start of this ambitious project. We provide an overview of the key aspects of graphene and related materials (GRMs), ranging from fundamental research challenges to a variety of applications in a large number of sectors, highlighting the steps necessary to take GRMs from a state of raw potential to a point where they might revolutionize multiple industries. We also define an extensive list of acronyms in an effort to standardize the nomenclature in this emerging field.