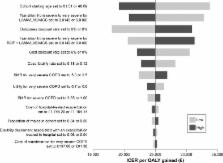 Patients included in the analysis had severe to very severe COPD, FEV 1 <50% predicted, symptoms of chronic bronchitis and ≥2 exacerbations per year. Our model was adapted from a previously published and validated model, and the analyses conducted from a UK National Health Service perspective. A scenario analysis considered a subset of patients who had experienced at least one COPD-related hospitalization within the previous year.

Roflumilast is a cost-effective treatment option for patients with severe or very severe COPD, chronic bronchitis, and a history of exacerbations. The availability of roflumilast as add-on treatment addresses an important unmet need in this patient population.

R. Gardner,  R Crapo,  A.-B. Morris (1981)
Forced expiratory volumes and flows were measured in 251 healthy nonsmoking men and women using techniques and equipment that meet American Thoracic Society (ATS) recommendations. Linear regression equations using height and age alone predict spirometric parameters as well as more complex equations using additional variables. Single values for 95% confidence intervals are acceptable and should replace the commonly used method of subtracting 20% to determine the lower limit of normal for a predicted value. Our study produced predicted values for forced vital capacity and forced expiratory volume in one second that were almost identical to those predicted by Morris and associates (1) when the data from their study were modified to be compatible with the back extrapolation technique recommended by the ATS. The study of Morris and colleagues was performed at sea level in rural subjects, whereas ours was performed at an altitude of 1,400 m in urban subjects. Either the present study or the study of Morris and co-workers, modified to back extrapolation, could be recommended for predicting normal values.

Claudio Tantucci,  Denise Modina (2012)
The landmark study of Fletcher and Peto on the natural history of tobacco smoke-related chronic airflow obstruction suggested that decline in the forced expiratory volume in the first second (FEV1) in chronic obstructive pulmonary disease (COPD) is slow at the beginning, becoming faster with more advanced disease. The present authors reviewed spirometric data of COPD patients included in the placebo arms of recent clinical trials to assess the lung function decline of each stage, defined according to the severity of airflow obstruction as proposed by the Global Initiative for Chronic Obstructive Lung Disease (GOLD) guidelines. In large COPD populations the mean rate of FEV1 decline in GOLD stages II and III is between 47 and 79 mL/year and 56 and 59 mL/year, respectively, and lower than 35 mL/year in GOLD stage IV. Few data on FEV1 decline are available for GOLD stage I. Hence, the loss of lung function, assessed as expiratory airflow reduction, seems more accelerated and therefore more relevant in the initial phases of COPD. To have an impact on the natural history of COPD, it is logical to look at the effects of treatment in the earlier stages.