MiR-19a, miR-122 and miR-223 are differentially regulated by hepatitis B virus X protein and involve in cell proliferation in hepatoma cells 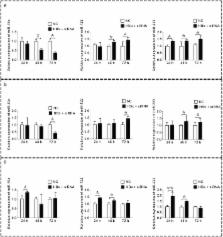 Hepatitis B virus (HBV) X protein (HBx) is a type of oncogenic protein involved in the progression of hepatocellular carcinoma (HCC) via interacting with host genes. Dysregulation of microRNAs (miRNAs) has been observed in HCC. This study aimed to investigate the role of HBx protein in the regulation of miR-19a, miR-122 and miR-223, and examine if these miRNAs involve in progression of malignant hepatocytes.

Quantitative real time PCR (qRT-PCR) was used to measure the expression of miR-19a, miR-122 and miR-223 in patient samples and in HepG2 cells transfected with HBx or 1.3 fold HBV genome and also in HepG2.2.15 cells, which stably produces HBV. Their target mRNAs and proteins-PTEN, cyclin G1 and c-myc were measured by qRT-PCR and western blot, respectively. The effect of miR-19a, miR-122 and miR-223, and their respective target genes, on cell proliferation was analyzed using 5-ethynyl-2-deoxyuridine incorporation and MTT assay.

The expression of miR-19a, miR-122 and miR-223 were differentially regulated by HBx protein, the differential expression of miR-19a, miR-122 and miR-223 plays an important role in cell proliferation of HCC. This study provides new insight into understanding how HBx protein interacts with miRNAs and subsequently regulates host function.

MicroRNA-223 is commonly repressed in hepatocellular carcinoma and potentiates expression of Stathmin1.

Michele Milella,  Italia Falcone,  Fabiana Conciatori … (2015)
PTEN is the most important negative regulator of the PI3K signaling pathway. In addition to its canonical, PI3K inhibition-dependent functions, PTEN can also function as a tumor suppressor in a PI3K-independent manner. Indeed, the PTEN network regulates a broad spectrum of biological functions, modulating the flow of information from membrane-bound growth factor receptors to nuclear transcription factors, occurring in concert with other tumor suppressors and oncogenic signaling pathways. PTEN acts through its lipid and protein phosphatase activity and other non-enzymatic mechanisms. Studies conducted over the past 10 years have expanded our understanding of the biological role of PTEN, showing that in addition to its ability to regulate proliferation and cell survival, it also plays an intriguing role in regulating genomic stability, cell migration, stem cell self-renewal, and tumor microenvironment. Changes in PTEN protein levels, location, and enzymatic activity through various molecular mechanisms can generate a continuum of functional PTEN levels in inherited syndromes, sporadic cancers, and other diseases. PTEN activity can indeed, be modulated by mutations, epigenetic silencing, transcriptional repression, aberrant protein localization, and post-translational modifications. This review will discuss our current understanding of the biological role of PTEN, how PTEN expression and activity are regulated, and the consequences of PTEN dysregulation in human malignant tumors.