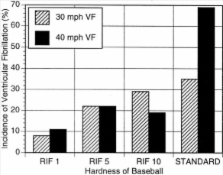 A PubMed (MEDLINE) search for commotio cordis was conducted on July 1, 2008, and it yielded 106 results, of which 26 were used for this review, including experimental models, simulation studies, case analysis studies, case reports, general recommendation, review articles, and editorials.

There are more than 190 reported cases of commotio cordis in the United States. Forty-seven percent of reported cases occurred during athletic participation. Commotio cordis is the second-most common cause of sudden cardiac death in athletes. Occurrence of commotio cordis is related to time of impact during the cardiac cycle, direct impact over the heart, the hardness and speed of the projectile, and the ineffectiveness of chest barriers. As a result, the US Consumer Product Safety Commission recommends that softer “safety” baseballs be used for youth baseball. Resuscitation using defibrillation was effective in only 15% of cases. Resuscitation within 3 minutes resulted in a survival rate of 25% (17 of 68 cases). Survival drops to 3% when resuscitation is delayed beyond 3 minutes. Survival of commotio cordis has risen from 10% to 15% since 2001. Reduced ventricular ejection fraction has been identified in some commotio cordis survivors.

Preventive measures, such as using soft “safety” balls and making automated external defibrillators available at sporting venues, can reduce commotio cordis morbidity and mortality. Chest protector designs can be improved to enhance protection. Return to play is best left to clinical judgment given that data are lacking with regard to susceptibility for reoccurrence.

Jin-Wang Wei, M Vecchiotti, Ganesh Pandian … (1998)
The syndrome of sudden death due to low-energy trauma to the chest wall (commotio cordis) has been described in young sports participants, but the mechanism is unknown. We developed a swine model of commotio cordis in which a low-energy impact to the chest wall was produced by a wooden object the size and weight of a regulation baseball. This projectile was thrust at a velocity of 30 miles per hour and was timed to the cardiac cycle. We first studied 18 young pigs, 6 subjected to multiple chest impacts and 12 to single impacts. Of the 10 impacts occurring within the window from 30 to 15 msec before the peak of the T wave on the electrocardiogram, 9 produced ventricular fibrillation. Ventricular fibrillation was not produced by impacts at any other time during the cardiac cycle. Of the 10 impacts sustained during the QRS complex, 4 resulted in transient complete heart block. We also studied whether the use of safety baseballs, which are softer than standard ones, would reduce the risk of arrhythmia. A total of 48 additional animals sustained up to three impacts during the T-wave window of vulnerability to ventricular fibrillation with a regulation baseball and safety baseballs of three degrees of hardness. We found that the likelihood of ventricular fibrillation was proportional to the hardness of the ball, with the softest balls associated with the lowest risk (two instances of ventricular fibrillation after 26 impacts, as compared with eight instances after 23 impacts with regulation baseballs). This experimental model of commotio cordis closely resembles the clinical profile of this catastrophic event. Whether ventricular fibrillation occurred depended on the precise timing of the impact. Safety baseballs, as compared with regulation balls, may reduce the risk of commotio cordis.

Blunt impact to the chest leading to sudden death from cardiac arrest during sports activities.

Jerry Kaplan, Barry J Maron, Liviu Poliac … (1995)
Sudden death from cardiac arrest in a young person may occur during sports play after a blunt blow to the chest in the absence of structural cardiovascular disease or traumatic injury (cardiac concussion or commotio cordis). We studied the clinical features of this apparently uncommon but important phenomenon. We identified cases from the registries of relevant agencies and organizations, as well as newsmedia accounts, and developed a clinical profile of 25 children and young adults, 3 to 19 years of age. Each victim collapsed with cardiac arrest immediately after an unexpected blow to the chest, which was usually inflicted by a projectile (such as a baseball or hockey puck). Incidents took place during organized competitive sports in 16 cases and in recreational settings at home, at school, or on the playground in 9. In each instance, the impact to the chest was not judged to be extraordinary for the sport involved and did not appear to have sufficient force to cause death. Twelve victims collapsed virtually instantaneously on impact, whereas 13 remained conscious and physically active for a brief time before cardiac arrest. Cardiopulmonary resuscitation was administered within about three minutes to 19 victims, but normal cardiac rhythm could be restored in only 2 (both incurred irreversible brain damage and died shortly thereafter). Seven victims (28 percent) were wearing some form of protective chest padding. We speculate that most sudden deaths related to impact to the chest (not associated with traumatic injury) are due to ventricular dysrhythmia induced by an abrupt, blunt precordial blow, presumably delivered at an electrically vulnerable phase of ventricular excitability. This profile of blunt chest impact leading to cardiac arrest adds to our understanding of the range of causes of sudden death on the athletic field and may help in the development of preventive measures.

S Kyle, Andrea S Link, N. A. Mark Estes … (2002)
Although blunt, nonpenetrating chest blows causing sudden cardiac death (commotio cordis) are often associated with competitive sports, dangers implicit in such blows can extend into many other life activities. To describe the comprehensive spectrum of commotio cordis events. Analysis of confirmed cases from the general community assembled in the US Commotio Cordis Registry occurring up to September 1, 2001. Commotio cordis event. Of 128 confirmed cases, 122 (95%) were in males and the mean (SD) age was 13.6 (8.2) years (median, 14 years; range, 3 months to 45 years); only 28 (22%) cases were aged 18 years or older. Commotio cordis events occurred most commonly during organized sporting events (79 [62%]), such as baseball, but 49 (38%) occurred as part of daily routine and recreational activities. Fatal blows were inflicted with a wide range of velocities but often occurred inadvertently and under circumstances not usually associated with risk for sudden death in informal settings near the home or playground. Twenty-two (28%) participants were wearing commercially available chest barriers, including 7 in whom the projectile made direct contact with protective padding (baseball catchers and lacrosse/hockey goalies), and 2 in whom the projectile was a baseball specifically designed to reduce risk. Only 21 (16%) individuals survived their event, with particularly prompt cardiopulmonary resuscitation/defibrillation (most commonly reversing ventricular fibrillation) the only identifiable factor associated with a favorable outcome. The expanded spectrum of commotio cordis illustrates the potential dangers implicit in striking the chest, regardless of the intent or force of the blow. These findings also suggest that the safety of young athletes will be enhanced by developing more effective preventive strategies (such as chest wall barriers) to achieve protection from ventricular fibrillation following precordial blows.