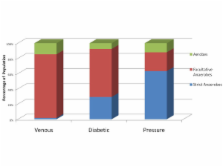 Chronic wound pathogenic biofilms are host-pathogen environments that colonize and exist as a cohabitation of many bacterial species. These bacterial populations cooperate to promote their own survival and the chronic nature of the infection. Few studies have performed extensive surveys of the bacterial populations that occur within different types of chronic wound biofilms. The use of 3 separate16S-based molecular amplifications followed by pyrosequencing, shotgun Sanger sequencing, and denaturing gradient gel electrophoresis were utilized to survey the major populations of bacteria that occur in the pathogenic biofilms of three types of chronic wound types: diabetic foot ulcers (D), venous leg ulcers (V), and pressure ulcers (P).

There are specific major populations of bacteria that were evident in the biofilms of all chronic wound types, including Staphylococcus, Pseudomonas, Peptoniphilus, Enterobacter, Stenotrophomonas, Finegoldia, and Serratia spp. Each of the wound types reveals marked differences in bacterial populations, such as pressure ulcers in which 62% of the populations were identified as obligate anaerobes. There were also populations of bacteria that were identified but not recognized as wound pathogens, such as Abiotrophia para-adiacens and Rhodopseudomonas spp. Results of molecular analyses were also compared to those obtained using traditional culture-based diagnostics. Only in one wound type did culture methods correctly identify the primary bacterial population indicating the need for improved diagnostic methods.

If clinicians can gain a better understanding of the wound's microbiota, it will give them a greater understanding of the wound's ecology and will allow them to better manage healing of the wound improving the prognosis of patients. This research highlights the necessity to begin evaluating, studying, and treating chronic wound pathogenic biofilms as multi-species entities in order to improve the outcomes of patients. This survey will also foster the pioneering and development of new molecular diagnostic tools, which can be used to identify the community compositions of chronic wound pathogenic biofilms and other medical biofilm infections.

Bacterial biofilms: a common cause of persistent infections.

J Costerton,  Christine Stewart,  E. Peter Greenberg (1999)
Bacteria that attach to surfaces aggregate in a hydrated polymeric matrix of their own synthesis to form biofilms. Formation of these sessile communities and their inherent resistance to antimicrobial agents are at the root of many persistent and chronic bacterial infections. Studies of biofilms have revealed differentiated, structured groups of cells with community properties. Recent advances in our understanding of the genetic and molecular basis of bacterial community behavior point to therapeutic targets that may provide a means for the control of biofilm infections.

J Costerton,  Rodney M. Donlan (2002)
Though biofilms were first described by Antonie van Leeuwenhoek, the theory describing the biofilm process was not developed until 1978. We now understand that biofilms are universal, occurring in aquatic and industrial water systems as well as a large number of environments and medical devices relevant for public health. Using tools such as the scanning electron microscope and, more recently, the confocal laser scanning microscope, biofilm researchers now understand that biofilms are not unstructured, homogeneous deposits of cells and accumulated slime, but complex communities of surface-associated cells enclosed in a polymer matrix containing open water channels. Further studies have shown that the biofilm phenotype can be described in terms of the genes expressed by biofilm-associated cells. Microorganisms growing in a biofilm are highly resistant to antimicrobial agents by one or more mechanisms. Biofilm-associated microorganisms have been shown to be associated with several human diseases, such as native valve endocarditis and cystic fibrosis, and to colonize a wide variety of medical devices. Though epidemiologic evidence points to biofilms as a source of several infectious diseases, the exact mechanisms by which biofilm-associated microorganisms elicit disease are poorly understood. Detachment of cells or cell aggregates, production of endotoxin, increased resistance to the host immune system, and provision of a niche for the generation of resistant organisms are all biofilm processes which could initiate the disease process. Effective strategies to prevent or control biofilms on medical devices must take into consideration the unique and tenacious nature of biofilms. Current intervention strategies are designed to prevent initial device colonization, minimize microbial cell attachment to the device, penetrate the biofilm matrix and kill the associated cells, or remove the device from the patient. In the future, treatments may be based on inhibition of genes involved in cell attachment and biofilm formation.

Robert Lindsay,  Deirdre L Church,  Brent W Winston … (2006)
Burns are one of the most common and devastating forms of trauma. Patients with serious thermal injury require immediate specialized care in order to minimize morbidity and mortality. Significant thermal injuries induce a state of immunosuppression that predisposes burn patients to infectious complications. A current summary of the classifications of burn wound infections, including their diagnosis, treatment, and prevention, is given. Early excision of the eschar has substantially decreased the incidence of invasive burn wound infection and secondary sepsis, but most deaths in severely burn-injured patients are still due to burn wound sepsis or complications due to inhalation injury. Burn patients are also at risk for developing sepsis secondary to pneumonia, catheter-related infections, and suppurative thrombophlebitis. The introduction of silver-impregnated devices (e.g., central lines and Foley urinary catheters) may reduce the incidence of nosocomial infections due to prolonged placement of these devices. Improved outcomes for severely burned patients have been attributed to medical advances in fluid resuscitation, nutritional support, pulmonary and burn wound care, and infection control practices.