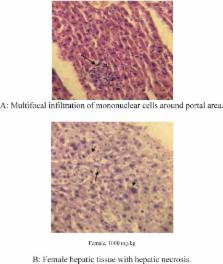 The species Asteraceae Centaurea repens (Asteraceae), known as Acroptilon repens, and Talkhe in persian is used in folk medicine as an emetic, anti-epileptic, and anti-malaria herb in many parts of the world but its toxic effects have not determined yet. This study aimed to evaluate the acute and subchronic toxicity of this extract to find its possible adverse health effects through clinical, hematological, biochemical, and histopathological endpoints in both gender of mice. Aerial parts of the plant were air-dried and the terpene extract of aerial parts of plant was provided by percolation using methanol, petroleum ether, and diethyl ether. All clinical, biochemical and histopathological changes were assessed in appropriate endpoints and compared with control group. Although no mortality was seen in acute study by administrating doses up to 2000 mg/kg, repeated dose study on 1000 mg/kg doses in 28 days in both genders showed liver necrosis and rise of liver enzymes (p-value < 0.05). Histopathological studies didn’t show any other organ toxicity in dosed up to 1000 mg/kg. At the same time this study showed for the first the antihyperlipidemic properties of the aerial extract of Acroptilin in mice model. The pharmacological and histopathological results of the present study proved that the total parts of Acroptilon repens could be studied for supporting the traditional assertion in folk medicine to heal hyperlipidemia, diabetes, and cancer in lower doses although we performed the present study and concluded liver toxicity by subchronic use of Acropitolon repens extract.

Reactive oxygen species formation as a biomarker of methylmercury and trimethyltin neurotoxicity.

S. Ali,  G Bondy,  C. Lebel (1991)
Reactive oxygen species (ROS) such as superoxide anion, hydrogen peroxide, and hydroxyl radicals are believed to be initiators of peroxidative cell damage. This paper focused on the use of 2',7'-dichlorofluorescein-diacetate (DCFH-DA) to quantitate cerebral ROS as an index for neurotoxicity. This technique employs an assay of dichlorofluorescein (DCF), the fluorescent product of dichlorofluorescein (DCFH). Data from studies using various free radical generating systems, several iron chelators and hydroxyl radical scavengers suggest that DCFH oxidation may result in several reactive intermediates. In a biological system (synaptosomes isolated from untreated rats) DCF fluorescence was stimulated by ascorbate or FeSO4, while deferoxamine inhibited the ascorbate/FeSO4-induced stimulation of DCF formation. Two organometals, methylmercury (MeHg) and trimethyltin (TMT), known to produce neurotoxicity were tested. In vitro exposure to MeHg (10-20 microM) increased the rate of formation of ROS while TMT (5-40 microM) had no effect. In vivo, 48 hr and 1 week after a single injection of MeHg (1 mg/kg, i.p.) in mice and 1 week after a single injection of MeHg (5 mg/kg, i.p.) in rats, the rate of formation of ROS in both rat and mouse cerebellum was significantly increased. Pretreatment with deferoxamine, a potent iron-chelator, prevented MeHg-induced increase of ROS. In hippocampus and frontal cortex, ROS formation rates were also elevated 48 hr after TMT injection (3 mg/kg, i.p.) in mice. These results demonstrate that DCF fluorescence provides a good measure of overall ROS formation in synaptosomes of both in vitro as well as in vivo systems. Since ROS formation was selectively increased in areas known to be specifically vulnerable to organometals (cerebellum in the case of MeHg and hippocampus in the case of TMT), these studies further support that oxidative damage may be the primary mechanism underlying the neurotoxicity induced by these organometals.

Brian A Mealor,  Ann Hild (2006)
Ecological impacts of invasive plant species are well documented, but the genetic response of native species to invasive dominance has been often overlooked. Invasive plants can drastically alter site conditions where they reach dominance, potentially exerting novel selective pressures on persistent native plant populations. Do native plant populations in old exotic invasions show evidence of selection when compared to conspecific populations in adjacent, noninvaded areas? We employ amplified fragment length polymorphism (AFLP) analysis to screen a large number of loci from two native grass species (Hesperostipa comata (Trin. & Rupr.) Barkworth and Sporobolus airoides Torr.) that occur in old infestations of the invasive forb Acroptilon repens. We then compare observed locus by locus F(ST) values with distributions of F(ST) estimated from simulation models under expectation of neutrality. We also compare the proportion of loci possibly linked to selection and those not linked to selection which exhibit parallel trends in divergence between two community types (invaded, noninvaded). Few loci (H. comata, 2.6%; S. airoides, 8.7%) in the two native grasses may be linked to genes under the influence of selection. Also, loci linked to selection showed a greater portion of parallel trends in divergence than neutral loci. Genetic similarities between community types were less than genetic similarity within community types suggesting differentiation in response to community alteration. These results indicate that a small portion of scored AFLP loci may be linked to genes undergoing selection tied to community dominance by an invasive species. We propose that native plants in communities dominated by exotic invasives may be undergoing natural selection.

Renée L. Eriksen,  José Hierro,  Özkan Eren … (2014)
The natural history of introduced species is often unclear due to a lack of historical records. Even when historical information is readily available, important factors of the invasions such as genetic bottlenecks, hybridization, historical relationships among populations and adaptive changes are left unknown. In this study, we developed a set of nuclear, simple sequence repeat markers and used these to characterize the genetic diversity and population structure among native (Eurasian) and non-native (North and South American) populations of Centaurea solstitialis L., (yellow starthistle). We used these data to test hypotheses about the invasion pathways of the species that were based on historical and geographical records, and we make inferences about historical relationships among populations and demographic processes following invasion. We confirm that the center of diversity and the native range of the species is likely the eastern Mediterranean region in the vicinity of Turkey. From this region, the species likely proceeded to colonize other parts of Europe and Asia via a slow, stepwise range expansion. Spanish populations were the primary source of seed to invade South America via human-mediated events, as was evident from historical records, but populations from the eastern Mediterranean region were also important. North American populations were largely derived from South America, but had secondary contributors. We suggest that the introduction history of non-native populations from disparate parts of the native range have allowed not just one, but multiple opportunities first in South America then again in North America for the creation of novel genotypes via intraspecific hybridization. We propose that multiple intraspecific hybridization events may have created especially potent conditions for the selection of a noxious invader, and may explain differences in genetic patterns among North and South America populations, inferred differences in demographic processes, as well as morphological differences previously reported from common garden experiments.