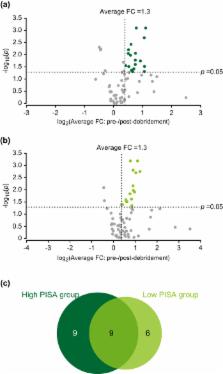 The subgingival microbiome in health and periodontitis and its relationship with community biomass and inflammation.

Loreto Abusleme, Amanda Dupuy, Nicolás DUTZAN … (2013)
The goals of this study were to better understand the ecology of oral subgingival communities in health and periodontitis and elucidate the relationship between inflammation and the subgingival microbiome. Accordingly, we used 454-pyrosequencing of 16S rRNA gene libraries and quantitative PCR to characterize the subgingival microbiome of 22 subjects with chronic periodontitis. Each subject was sampled at two sites with similar periodontal destruction but differing in the presence of bleeding, a clinical indicator of increased inflammation. Communities in periodontitis were also compared with those from 10 healthy individuals. In periodontitis, presence of bleeding was not associated with different α-diversity or with a distinct microbiome, however, bleeding sites showed higher total bacterial load. In contrast, communities in health and periodontitis largely differed, with higher diversity and biomass in periodontitis. Shifts in community structure from health to periodontitis resembled ecological succession, with emergence of newly dominant taxa in periodontitis without replacement of primary health-associated species. That is, periodontitis communities had higher proportions of Spirochetes, Synergistetes, Firmicutes and Chloroflexi, among other taxa, while the proportions of Actinobacteria, particularly Actinomyces, were higher in health. Total Actinomyces load, however, remained constant from health to periodontitis. Moreover, an association existed between biomass and community structure in periodontitis, with the proportion of specific taxa correlating with bacterial load. Our study provides a global-scale framework for the ecological events in subgingival communities that underline the development of periodontitis. The association, in periodontitis, between inflammation, community biomass and community structure and their role in disease progression warrant further investigation.

Arjen Lommen (2009)
Hyphenated full-scan MS technology creates large amounts of data. A versatile easy to handle automation tool aiding in the data analysis is very important in handling such a data stream. MetAlign softwareas described in this manuscripthandles a broad range of accurate mass and nominal mass GC/MS and LC/MS data. It is capable of automatic format conversions, accurate mass calculations, baseline corrections, peak-picking, saturation and mass-peak artifact filtering, as well as alignment of up to 1000 data sets. A 100 to 1000-fold data reduction is achieved. MetAlign software output is compatible with most multivariate statistics programs.