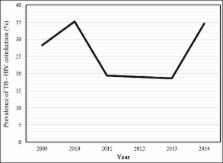 Tuberculosis (TB) is the second leading cause of death from infectious disease globally with its impact more dramatic in resource limited settings. Individuals with human immunodeficiency virus (HIV) infection who also develop tuberculosis represent a significant challenge to TB control. This study was carried out to determine the prevalence of TB–HIV coinfection and pattern of infection among TB patients. We also compared treatment outcome among coinfected patients with those not coinfected.

A six-year retrospective review of records of patients managed at the Tuberculosis Treatment Center of the LAUTECH Teaching Hospital, South-Western Nigeria from January 2009 to December 2014 was carried out.

One hundred and five (26.3%) of the 399 TB patients seen in the study period were coinfected with HIV. About 10% of the subjects had extrapulmonary tuberculosis. Treatment failure was significantly worse among patients who had both HIV and TB compared with those who had TB only (49.5% vs. 32%, p = 0.001). Death rate was also higher in the coinfected individuals implying a poorer clinical outcome.

Tomasz Pawłowski,  Marianne Jansson,  Markus Sköld … (2012)
Tuberculosis (TB) and HIV co-infections place an immense burden on health care systems and pose particular diagnostic and therapeutic challenges. Infection with HIV is the most powerful known risk factor predisposing for Mycobacterium tuberculosis infection and progression to active disease, which increases the risk of latent TB reactivation 20-fold. TB is also the most common cause of AIDS-related death. Thus, M. tuberculosis and HIV act in synergy, accelerating the decline of immunological functions and leading to subsequent death if untreated. The mechanisms behind the breakdown of the immune defense of the co-infected individual are not well known. The aim of this review is to highlight immunological events that may accelerate the development of one of the two diseases in the presence of the co-infecting organism. We also review possible animal models for studies of the interaction of the two pathogens, and describe gaps in knowledge and needs for future studies to develop preventive measures against the two diseases.

Jason R Andrews,  Michelle Scott,  Anthony P. Moll … (2010)
The multidrug-resistant (MDR) and extensively drug-resistant (XDR) tuberculosis (TB) epidemics are rapidly expanding in South Africa. Our initial report of HIV-associated XDR TB in South Africa revealed rapid and near complete mortality. Lower mortality has been described in the literature, but few of these patients have been HIV coinfected. To characterize mortality from MDR and XDR TB in a setting with high HIV-coinfection rates. We conducted a retrospective observational study among 654 MDR and XDR TB cases diagnosed in Tugela Ferry, South Africa, from 2005 to 2007. Demographics and HIV status were abstracted from available medical records. Survival was determined from the date of sputum collection until October 2008 and correlated with year of diagnosis and drug-susceptibility test results. From 2005 to 2007, 272 MDR TB and 382 XDR TB cases were diagnosed; HIV-coinfection rates were 90 and 98%, respectively. One-year mortality was 71% for MDR and 83% for XDR TB patients; 40% of MDR TB and 51% of XDR TB cases died within 30 days of sputum collection. One-year mortality among both MDR and XDR TB patients improved from 2005 to 2007; however, the majority of deaths still occurred within the first 30 days. One-year and 30-day mortality rates were worse with greater degree of drug resistance (P < 0.001). Mortality from MDR and XDR TB in this high HIV-prevalence region is extraordinarily high, particularly within the first 30 days. Efforts to reduce mortality must focus on earlier diagnosis and early initiation of second-line TB and antiretroviral therapy.

Alladi Mohan,  Tamilarasu Kadhiravan,  V. Sharma (2005)
HIV/AIDS pandemic has caused a resurgence of TB, resulting in increased morbidity and mortality worldwide. HIV and Mycobacterium tuberculosis have a synergistic interaction; each accentuates progression of the other. Clinical presentation of TB in early HIV infection resembles that observed in immunocompetent persons. In late HIV infection, however, TB is often atypical in presentation, frequently causing extrapulmonary disease. These factors coupled with low sputum smear-positivity, often result in a delayed diagnosis. HIV-infected patients respond well to the standard 6-month antituberculosis treatment regimens, although mortality is high. Antituberculosis treatment is complicated by frequent drug-interactions with highly active antiretroviral therapy (HAART) and adverse drug reactions are more common among HIV-infected patients. Guidelines for the management of patients co-infected with HIV and TB are still evolving. Timely institution of antituberculosis treatment using the directly observed treatment, short-course (DOTS) strategy and HAART markedly improves the outcome of HIV-infected patients with TB.

Authors’ contribution O.A.O. and A.S.A. conceived and designed the study. A.S.A. and O.B.M. wrote the protocol and managed the literature search. R.A.O., A.S.A., O.A.O., and O.J.A. managed the acquisition of data. O.A.O., O.B.M., and A.S.A. performed analysis and interpretation of data. A.S.A., R.A.O., and O.J.A. wrote the first draft of the article. O.B.M. and O.A.O. made critical revisions to the draft. All authors read, edited, and approved the final article.

Founding sources: No financial support was received for this study.