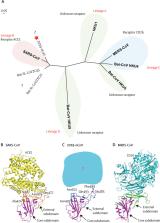 In late December, 2019, patients presenting with viral pneumonia due to an unidentified microbial agent were reported in Wuhan, China. A novel coronavirus was subsequently identified as the causative pathogen, provisionally named 2019 novel coronavirus (2019-nCoV). As of Jan 26, 2020, more than 2000 cases of 2019-nCoV infection have been confirmed, most of which involved people living in or visiting Wuhan, and human-to-human transmission has been confirmed.

We did next-generation sequencing of samples from bronchoalveolar lavage fluid and cultured isolates from nine inpatients, eight of whom had visited the Huanan seafood market in Wuhan. Complete and partial 2019-nCoV genome sequences were obtained from these individuals. Viral contigs were connected using Sanger sequencing to obtain the full-length genomes, with the terminal regions determined by rapid amplification of cDNA ends. Phylogenetic analysis of these 2019-nCoV genomes and those of other coronaviruses was used to determine the evolutionary history of the virus and help infer its likely origin. Homology modelling was done to explore the likely receptor-binding properties of the virus.

The ten genome sequences of 2019-nCoV obtained from the nine patients were extremely similar, exhibiting more than 99·98% sequence identity. Notably, 2019-nCoV was closely related (with 88% identity) to two bat-derived severe acute respiratory syndrome (SARS)-like coronaviruses, bat-SL-CoVZC45 and bat-SL-CoVZXC21, collected in 2018 in Zhoushan, eastern China, but were more distant from SARS-CoV (about 79%) and MERS-CoV (about 50%). Phylogenetic analysis revealed that 2019-nCoV fell within the subgenus Sarbecovirus of the genus Betacoronavirus, with a relatively long branch length to its closest relatives bat-SL-CoVZC45 and bat-SL-CoVZXC21, and was genetically distinct from SARS-CoV. Notably, homology modelling revealed that 2019-nCoV had a similar receptor-binding domain structure to that of SARS-CoV, despite amino acid variation at some key residues.

2019-nCoV is sufficiently divergent from SARS-CoV to be considered a new human-infecting betacoronavirus. Although our phylogenetic analysis suggests that bats might be the original host of this virus, an animal sold at the seafood market in Wuhan might represent an intermediate host facilitating the emergence of the virus in humans. Importantly, structural analysis suggests that 2019-nCoV might be able to bind to the angiotensin-converting enzyme 2 receptor in humans. The future evolution, adaptation, and spread of this virus warrant urgent investigation.

R Ingersoll,  Patrick W. Sheppard,  H Sheppard … (1998)
The development of an effective human immunodeficiency virus type 1 (HIV-1) vaccine is likely to depend on knowledge of circulating variants of genes other than the commonly sequenced gag and env genes. In addition, full-genome data are particularly limited for HIV-1 subtype C, currently the most commonly transmitted subtype in India and worldwide. Likewise, little is known about sequence variation of HIV-1 in India, the country facing the largest burden of HIV worldwide. Therefore, the objective of this study was to clone and characterize the complete genome of HIV-1 from seroconverters infected with subtype C variants in India. Cocultured HIV-1 isolates were obtained from six seroincident individuals from Pune, India, and virtually full-length HIV-1 genomes were amplified, cloned, and sequenced from each. Sequence analysis revealed that five of the six genomes were of subtype C, while one was a mosaic of subtypes A and C, with multiple breakpoints in env, nef, and the 3' long terminal repeat as determined by both maximal chi2 analysis and phylogenetic bootstrapping. Sequences were compared for preservation of known cytotoxic T lymphocyte (CTL) epitopes. Compared with those of the HIV-1LAI sequence, 38% of well-defined CTL epitopes were identical. The proportion of nonconservative substitutions for Env, at 61%, was higher (P < 0.001) than those for Gag (24%), Pol (18%), and Nef (32%). Therefore, characterized CTL epitopes demonstrated substantial differences from subtype B laboratory strains, which were most pronounced in Env. Because these clones were obtained from Indian seroconverters, they are likely to facilitate vaccine-related efforts in India by providing potential antigens for vaccine candidates as well as for assays of vaccine responsiveness.

Dave Cavanagh (2015)
Infectious bronchitis virus (IBV), the coronavirus of the chicken (Gallus gallus), is one of the foremost causes of economic loss within the poultry industry, affecting the performance of both meat-type and egg-laying birds. The virus replicates not only in the epithelium of upper and lower respiratory tract tissues, but also in many tissues along the alimentary tract and elsewhere e.g. kidney, oviduct and testes. It can be detected in both respiratory and faecal material. There is increasing evidence that IBV can infect species of bird other than the chicken. Interestingly breeds of chicken vary with respect to the severity of infection with IBV, which may be related to the immune response. Probably the major reason for the high profile of IBV is the existence of a very large number of serotypes. Both live and inactivated IB vaccines are used extensively, the latter requiring priming by the former. Their effectiveness is diminished by poor cross-protection. The nature of the protective immune response to IBV is poorly understood. What is known is that the surface spike protein, indeed the amino-terminal S1 half, is sufficient to induce good protective immunity. There is increasing evidence that only a few amino acid differences amongst S proteins are sufficient to have a detrimental impact on cross-protection. Experimental vector IB vaccines and genetically manipulated IBVs--with heterologous spike protein genes--have produced promising results, including in the context of in ovo vaccination.