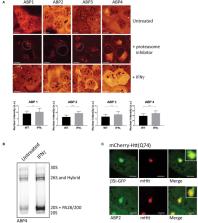 The proteasome is a multi-catalytic molecular machine that plays a key role in the degradation of many cytoplasmic and nuclear proteins. The proteasome is essential and proteasome malfunction is associated with various disease pathologies. Proteasome activity depends on its catalytic subunits which are interchangeable and also on the interaction with the associated regulatory cap complexes. Here, we describe and compare various methods that allow the study of proteasome function in living cells. Methods include the use of fluorescently tagged proteasome subunits and the use of activity-based proteasome probes. These probes can be used in both biochemical assays and in microscopy-based experiments. Together with tagged proteasomes, they can be used to study proteasome localization, dynamics, and activity.

Structure and functions of the 20S and 26S proteasomes.

O Coux,  K Tanaka,  Alexander Goldberg (1995)
The proteasome is an essential component of the ATP-dependent proteolytic pathway in eukaryotic cells and is responsible for the degradation of most cellular proteins. The 20S (700-kDa) proteasome contains multiple peptidase activities that function through a new type of proteolytic mechanism involving a threonine active site. The 26S (2000-kDa) complex, which degrades ubiquitinated proteins, contains in addition to the 20S proteasome a 19S regulatory complex composed of multiple ATPases and components necessary for binding protein substrates. The proteasome has been highly conserved during eukaryotic evolution, and simpler forms are even found in archaebacteria and eubacteria. Major advances have been achieved recently in our knowledge about the molecular organization of the 20S and 19S particles, their subunits, the proteasome's role in MHC-class 1 antigen presentation, and regulators of its activities. This article focuses on recent progress concerning the biochemical mechanisms and intracellular functions of the 20S and 26S proteasomes.

The 26S proteasome: a molecular machine designed for controlled proteolysis.

W Baumeister,  D Voges,  P Zwickl (1998)
In eukaryotic cells, most proteins in the cytosol and nucleus are degraded via the ubiquitin-proteasome pathway. The 26S proteasome is a 2.5-MDa molecular machine built from approximately 31 different subunits, which catalyzes protein degradation. It contains a barrel-shaped proteolytic core complex (the 20S proteasome), capped at one or both ends by 19S regulatory complexes, which recognize ubiquitinated proteins. The regulatory complexes are also implicated in unfolding and translocation of ubiquitinated targets into the interior of the 20S complex, where they are degraded to oligopeptides. Structure, assembly and enzymatic mechanism of the 20S complex have been elucidated, but the functional organization of the 19S complex is less well understood. Most subunits of the 19S complex have been identified, however, specific functions have been assigned to only a few. A low-resolution structure of the 26S proteasome has been obtained by electron microscopy, but the precise arrangement of subunits in the 19S complex is unclear.

Gabriel C. Lander,  Eric Estrin,  Mary E. Matyskiela … (2012)
The proteasome is the major ATP-dependent protease in eukaryotic cells, but limited structural information strongly restricts a mechanistic understanding of its activities. The proteasome regulatory particle, consisting of the lid and base subcomplexes, recognizes and processes poly-ubiquitinated substrates. We used electron microscopy and a newly-developed heterologous expression system for the lid to delineate the complete subunit architecture of the regulatory particle. Our studies reveal the spatial arrangement of ubiquitin receptors, deubiquitinating enzymes, and the protein unfolding machinery at subnanometer resolution, outlining the substrate’s path to degradation. Unexpectedly, the ATPase subunits within the base unfoldase are arranged in a spiral staircase, providing insight into potential mechanisms for substrate translocation through the central pore. Large conformational rearrangements of the lid upon holoenzyme formation suggest allosteric regulation of deubiquitination. We provide a structural basis for the ability of the proteasome to degrade a diverse set of substrates and thus regulate vital cellular processes.

This article was submitted to Protein Folding, Misfolding and Degradation, a section of the journal Frontiers in Molecular Biosciences