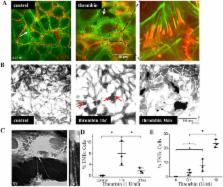 Endothelial barrier formation is maintained by intercellular communication through junctional proteins. The mechanisms involved in maintaining endothelial communication subsequent to barrier disruption remain unclear. It is known that low numbers of endothelial cells can be interconnected by homotypic actin-driven tunneling nanotubes (TNTs) which could be important for intercellular transfer of information in vascular physiology. Here we sought insight into the triggers for TNT formation. Wheat germ agglutinin, a C-type lectin and known label for TNTs, unexpectedly caused striking induction of TNTs. A succinylated derivative was by contrast inactive, suggesting mediation by a sialylated protein. Through siRNA-mediated knockdown we identified that this protein was likely to be CD31, an important sialylated membrane protein normally at endothelial cell junctions. We subsequently considered thrombin as a physiological inducer of endothelial TNTs because it reduces junctional contact. Thrombin reduced junctional contact, redistributed CD31 and induced TNTs, but its effect on TNTs was CD31-independent. Thrombin-induced TNTs nevertheless required PKCα, a known mediator of thrombin-dependent junctional remodelling, suggesting a necessity for junctional proteins in TNT formation. Indeed, TNT-inducing effects of wheat germ agglutinin and thrombin were both correlated with cortical actin rearrangement and similarly Ca 2+-dependent, suggesting common underlying mechanisms. Once formed, Ca 2+ signalling along TNTs was observed.

Jill Gready,  Alex Zelensky (2005)
The superfamily of proteins containing C-type lectin-like domains (CTLDs) is a large group of extracellular Metazoan proteins with diverse functions. The CTLD structure has a characteristic double-loop ('loop-in-a-loop') stabilized by two highly conserved disulfide bridges located at the bases of the loops, as well as a set of conserved hydrophobic and polar interactions. The second loop, called the long loop region, is structurally and evolutionarily flexible, and is involved in Ca2+-dependent carbohydrate binding and interaction with other ligands. This loop is completely absent in a subset of CTLDs, which we refer to as compact CTLDs; these include the Link/PTR domain and bacterial CTLDs. CTLD-containing proteins (CTLDcps) were originally classified into seven groups based on their overall domain structure. Analyses of the superfamily representation in several completely sequenced genomes have added 10 new groups to the classification, and shown that it is applicable only to vertebrate CTLDcps; despite the abundance of CTLDcps in the invertebrate genomes studied, the domain architectures of these proteins do not match those of the vertebrate groups. Ca2+-dependent carbohydrate binding is the most common CTLD function in vertebrates, and apparently the ancestral one, as suggested by the many humoral defense CTLDcps characterized in insects and other invertebrates. However, many CTLDs have evolved to specifically recognize protein, lipid and inorganic ligands, including the vertebrate clade-specific snake venoms, and fish antifreeze and bird egg-shell proteins. Recent studies highlight the functional versatility of this protein superfamily and the CTLD scaffold, and suggest further interesting discoveries have yet to be made.

Y Wang,  Yunhui Zhang,  J Cui … (2011)
Tunneling nanotubes (TNTs) can be induced in rat hippocampal astrocytes and neurons with H(2)O(2) or serum depletion. Major cytoskeletal component of TNTs is F-actin. TNTs transfer endoplasmic reticulum, mitochondria, Golgi, endosome and intracellular as well as extracellular amyloid β. TNT development is a property of cells under stress. When two populations of cells are co-cultured, it is the stressed cells that always develop TNTs toward the unstressed cells. p53 is crucial for TNT development. When p53 function is deleted by either dominant negative construct or siRNAs, TNT development is inhibited. In addition, we find that among the genes activated by p53, epidermal growth factor receptor is also important to TNT development. Akt, phosphoinositide 3-kinase and mTOR are involved in TNT induction. Our data suggest that TNTs might be a mechanism for cells to respond to harmful signals and transfer cellular substances or energy to another cell under stress. © 2011 Macmillan Publishers Limited