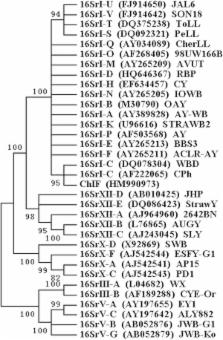 Phytoplasma-like bodies were observed under transmission electron microscope in stem tissues of symptomatic samples. The 16S rRNA operon and tuf genes from phytoplasmas were amplified by PCR assays. Phylogenetic trees were calculated respectively based on sequences data of these two genes. The pattern of restriction fragment length polymorphism (RFLP) was generated via digesting the PCR products of 16S rRNA gene with eight restriction enzymes.

The presence of phytoplasma in China ixeris exhibiting fasciation symptom was confirmed by the results of TEM observation and PCR testing. Based on sequence data, phylogeny analysis and actual restriction fragment length polymorphism (RFLP) analysis, the associated phytoplasma was classified as related to 16SrI-C subgroup. This was the first record of phytoplasmas in China ixeris.

'Candidatus Phytoplasma', a taxon for the wall-less, non-helical prokaryotes that colonize plant phloem and insects.

Construction of an interactive online phytoplasma classification tool, iPhyClassifier, and its application in analysis of the peach X-disease phytoplasma group (16SrIII)

This article is published under license to BioMed Central Ltd. This is an open access article distributed under the terms of the Creative Commons Attribution License ( http://creativecommons.org/licenses/by/2.0), which permits unrestricted use, distribution, and reproduction in any medium, provided the original work is properly cited.