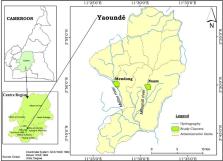 The contribution of Anopheles funestus to malaria transmission in the urban environment is still not well documented. The present study assesses the implication of An. funestus in malaria transmission in two districts, Nsam and Mendong, in the city of Yaoundé. Adult mosquitoes were collected using Centers for Disease Control and Prevention miniature light traps (CDC-LT) and human landing catches from April 2017 to March 2018 and were identified morphologically to the species level. Those belonging to the Anopheles gambiae complex and to the Anopheles funestus group were further processed by PCR to identify members of each complex/group. Anopheline mosquitoes were analysed to determine their infection status using an enzyme-linked immunosorbent assay. Bioassays were conducted with 2–5-day-old female Anopheles funestus and An. gambiae s.l. to determine their susceptibility to permethrin, deltamethrin and dichlorodiphenyltrichloroethane (DDT). Six anopheline species were collected in the peri-urban district of Mendong: Anopheles gambiae, An. coluzzii, An. funestus, An. leesoni, An. ziemanni and An. marshallii; only four out of the six were recorded in Nsam. Of the two members of the Anopheles gambiae complex collected, An. coluzzii was the most prevalent. Anopheles coluzzii was the most abundant species in Nsam, while An. funestus was the most abundant in Mendong. Both Anopheles funestus and An. gambiae s.l. were found to be infected with human Plasmodium at both sites, and both were found to be resistant to DDT, permethrin, and deltamethrin. This study confirms the participation of An. funestus in malaria transmission in Yaoundé and highlights the need to also target this species for sustainable control of malaria transmission.

Vincent Robert,  John Beier,  Jean-François Trape … (2003)
The rapid increase in the world's urban population has major implications for the epidemiology of malaria. A review of malaria transmission in sub-Saharan African cities shows the strong likelihood of transmission occurring within these sprawling cities, whatever the size or characteristics of their bioecologic environment. A meta-analysis of results from studies of malaria transmission in sub-Saharan Africa shows a loose linear negative relationship between mean annual entomologic inoculation rates (EIR) and the level of urbanicity. Few studies have failed to find entomologic evidence of some transmission. Our results show mean annual EIRs of 7.1 in the city centers, 45.8 in periurban areas, and 167.7 in rural areas. The impact of urbanization in reducing transmission is more marked in areas where the mean rainfall is low and seasonal. Considerable variation in the level of transmission exists among cities and within different districts in the same city. This article presents evidence from past literature to build a conceptual framework to begin to explain this heterogeneity. The potential for malaria epidemics owing to decreasing levels of natural immunity may be offset by negative impacts of urbanization on the larval ecology of anopheline mosquitoes. Malaria control in urban environments may be simpler as a result of urbanization; however, much of what we know about malaria transmission in rural environments might not hold in the urban context.