Quinolones: from antibiotics to autoinducers 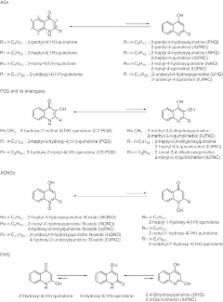 Since quinine was first isolated, animals, plants and microorganisms producing a wide variety of quinolone compounds have been discovered, several of which possess medicinally interesting properties ranging from antiallergenic and anticancer to antimicrobial activities. Over the years, these have served in the development of many synthetic drugs, including the successful fluoroquinolone antibiotics. Pseudomonas aeruginosa and related bacteria produce a number of 2-alkyl-4(1 H)-quinolones, some of which exhibit antimicrobial activity. However, quinolones such as the Pseudomonas quinolone signal and 2-heptyl-4-hydroxyquinoline act as quorum-sensing signal molecules, controlling the expression of many virulence genes as a function of cell population density. Here, we review selectively this extensive family of bicyclic compounds, from natural and synthetic antimicrobials to signalling molecules, with a special emphasis on the biology of P. aeruginosa. In particular, we review their nomenclature and biochemistry, their multiple properties as membrane-interacting compounds, inhibitors of the cytochrome bc 1 complex and iron chelators, as well as the regulation of their biosynthesis and their integration into the intricate quorum-sensing regulatory networks governing virulence and secondary metabolite gene expression.

J. Govan,  V Deretic (1996)
Respiratory infections with Pseudomonas aeruginosa and Burkholderia cepacia play a major role in the pathogenesis of cystic fibrosis (CF). This review summarizes the latest advances in understanding host-pathogen interactions in CF with an emphasis on the role and control of conversion to mucoidy in P. aeruginosa, a phenomenon epitomizing the adaptation of this opportunistic pathogen to the chronic chourse of infection in CF, and on the innate resistance to antibiotics of B. cepacia, person-to-person spread, and sometimes rapidly fatal disease caused by this organism. While understanding the mechanism of conversion to mucoidy in P. aeruginosa has progressed to the point where this phenomenon has evolved into a model system for studying bacterial stress response in microbial pathogenesis, the more recent challenge with B. cepacia, which has emerged as a potent bona fide CF pathogen, is discussed in the context of clinical issues, taxonomy, transmission, and potential modes of pathogenicity.

A characterization of DNA release in Pseudomonas aeruginosa cultures and biofilms.

D Essar,  L Eberly,  A Hadero … (1990)
Two anthranilate synthase gene pairs have been identified in Pseudomonas aeruginosa. They were cloned, sequenced, inactivated in vitro by insertion of an antibiotic resistance gene, and returned to P. aeruginosa, replacing the wild-type gene. One anthranilate synthase enzyme participates in tryptophan synthesis; its genes are designated trpE and trpG. The other anthranilate synthase enzyme, encoded by phnA and phnB, participates in the synthesis of pyocyanin, the characteristic phenazine pigment of the organism. trpE and trpG are independently transcribed; homologous genes have been cloned from Pseudomonas putida. The phenazine pathway genes phnA and phnB are cotranscribed. The cloned phnA phnB gene pair complements trpE and trpE(G) mutants of Escherichia coli. Homologous genes were not found in P. putida PPG1, a non-phenazine producer. Surprisingly, PhnA and PhnB are more closely related to E. coli TrpE and TrpG than to Pseudomonas TrpE and TrpG, whereas Pseudomonas TrpE and TrpG are more closely related to E. coli PabB and PabA than to E. coli TrpE and TrpG. We replaced the wild-type trpE on the P. aeruginosa chromosome with a mutant form having a considerable portion of its coding sequence deleted and replaced by a tetracycline resistance gene cassette. This resulted in tryptophan auxotrophy; however, spontaneous tryptophan-independent revertants appeared at a frequency of 10(-5) to 10(6). The anthranilate synthase of these revertants is not feedback inhibited by tryptophan, suggesting that it arises from PhnAB. phnA mutants retain a low level of pyocyanin production. Introduction of an inactivated trpE gene into a phnA mutant abolished residual pyocyanin production, suggesting that the trpE trpG gene products are capable of providing some anthranilate for pyocyanin synthesis.