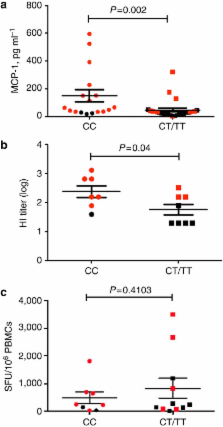 The SNP rs12252-C allele alters the function of interferon-induced transmembrane protein-3 increasing the disease severity of influenza virus infection in Caucasians, but the allele is rare. However, rs12252-C is much more common in Han Chinese. Here we report that the CC genotype is found in 69% of Chinese patients with severe pandemic influenza A H1N1/09 virus infection compared with 25% in those with mild infection. Specifically, the CC genotype was estimated to confer a sixfold greater risk for severe infection than the CT and TT genotypes. More importantly, because the risk genotype occurs with such a high frequency, its effect translates to a large population-attributable risk of 54.3% for severe infection in the Chinese population studied compared with 5.4% in Northern Europeans. Interferon-induced transmembrane protein-3 genetic variants could, therefore, have a strong effect of the epidemiology of influenza in China and in people of Chinese descent.

A variant in the IFITM3 gene increases the risk of severe influenza, but homozygosity is rare in Caucasians. The authors show that the variant gene is homozygous in 25% of healthy Chinese people, and 69% of those with severe pandemic influenza, suggesting that this gene influences the epidemiology of influenza in South-East Asia.

X. Pan,  Qing-Dong Jiang,  Irene J. Chang … (2010)
Tetherin and IFITM3 are recently identified interferon-induced cellular proteins that restrict infections by retroviruses and filoviruses and of influenza virus and flaviviruses, respectively. In our efforts to further explore their antiviral activities against other viruses and determine their antiviral mechanisms, we found that the two antiviral proteins potently inhibit the infection of vesicular stomatitis virus (VSV), a prototype member of the Rhabdoviridae family. Taking advantage of this well-studied virus infection system, we show that although both tetherin and IFITM3 are plasma membrane proteins, tetherin inhibits virion particle release from infected cells, while IFITM3 disrupts an early event after endocytosis of virion particles but before primary transcription of incoming viral genomes. Furthermore, we demonstrate that both the N-terminal 21 amino acid residues and C-terminal transmembrane region of IFITM3 are required for its antiviral activity. Collectively, our work sheds light on the mechanisms by which tetherin and IFITM3 restrict infection with rhabdoviruses and possibly other pathogenic viruses.

The Seroprevalence of Pandemic Influenza H1N1 (2009) Virus in China

Cuiling Xu,  Feng-Tian Bai,  A. Iuliano … (2011)
Background Mainland China experienced pandemic influenza H1N1 (2009) virus (pH1N1) with peak activity during November-December 2009. To understand the geographic extent, risk factors, and attack rate of pH1N1 infection in China we conducted a nationwide serological survey to determine the prevalence of antibodies to pH1N1. Methodology/Principal Findings Stored serum samples (n = 2,379) collected during 2006-2008 were used to estimate baseline serum reactogenicity to pH1N1. In January 2010, we used a multistage-stratified random sampling method to select 50,111 subjects who met eligibility criteria and collected serum samples and administered a standardized questionnaire. Antibody response to pH1N1 was measured using haemagglutination inhibition (HI) assay and the weighted seroprevalence was calculated using the Taylor series linearization method. Multivariable logistic regression analyses were used to examine risk factors for pH1N1 seropositivity. Baseline seroprevalence of pH1N1 antibody (HI titer ≥40) was 1.2%. The weighted seroprevalence of pH1N1 among the Chinese population was 21.5%(vaccinated: 62.0%; unvaccinated: 17.1%). Among unvaccinated participants, those aged 6-15 years (32.9%) and 16-24 years (30.3%) had higher seroprevalence compared with participants aged 25–59 years (10.7%) and ≥60 years (9.9%, P<0.0001). Children in kindergarten and students had higher odds of seropositivity than children in family care (OR: 1.36 and 2.05, respectively). We estimated that 207.7 million individuals (15.9%) experienced pH1N1 infection in China. Conclusions/Significance The Chinese population had low pre-existing immunity to pH1N1 and experienced a relatively high attack rate in 2009 of this virus. We recommend routine control measures such as vaccination to reduce transmission and spread of seasonal and pandemic influenza viruses.