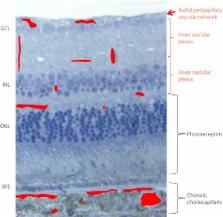 The Ins2Akita mouse as a model of early retinal complications in diabetes.

David A Antonetti,  R. Gardner,  Rohit Soans … (2005)
This study tested the Ins2(Akita) mouse as an animal model of retinal complications in diabetes. The Ins2(Akita) mutation results in a single amino acid substitution in the insulin 2 gene that causes misfolding of the insulin protein. The mutation arose and is maintained on the C57BL/6J background. Male mice heterozygous for this mutation have progressive loss of beta-cell function, decreased pancreatic beta-cell density, and significant hyperglycemia, as early as 4 weeks of age. Heterozygous Ins2(Akita) mice were bred to C57BL/6J mice, and male offspring were monitored for hyperglycemia, beginning at 4.5 weeks of age. After 4 to 36 weeks of hyperglycemia, the retinas were analyzed for vascular permeability, vascular lesions, leukostasis, morphologic changes of micro- and macroglia, apoptosis, retinal degeneration, and insulin receptor kinase activity. The mean blood glucose of Ins2(Akita) mice was significantly elevated, whereas the body weight at death was reduced compared with that of control animals. Compared with sibling control mice, the Ins2(Akita) mice had increased retinal vascular permeability after 12 weeks of hyperglycemia (P < 0.005), a modest increase in acellular capillaries after 36 weeks of hyperglycemia (P < 0.0008), and alterations in the morphology of astrocytes and microglia, but no changes in expression of Muller cell glial fibrillary acidic protein. Increased apoptosis was identified by immunoreactivity for active caspase-3 after 4 weeks of hyperglycemia (P < 0.01). After 22 weeks of hyperglycemia, there was a 16.7% central and 27% peripheral reduction in the thickness of the inner plexiform layer, a 15.6% peripheral reduction in the thickness of the inner nuclear layer (P < 0.001), and a 23.4% reduction in the number of cell bodies in the retinal ganglion cell layer (P < 0.005). In vitro insulin receptor kinase activity was reduced (P < 0.05) after 12 weeks of hyperglycemia. The retinas of heterozygous male Ins2(Akita) mice exhibit vascular, neural, and glial abnormalities generally consistent with clinical observations and other animal models of diabetes. In light of the relatively early, spontaneous onset of the disease and the popularity of the C57BL/6J inbred strain as a background for the generation and study of other genetic alterations, combining the Ins2(Akita) mutation with other engineered mutations will be of great use for studying the molecular basis of retinal complications of diabetes.

Oxygen distribution and consumption within the retina in vascularised and avascular retinas and in animal models of retinal disease.

Dao-Yi Yu,  Stephen Cringle (2001)
Maintenance of an adequate oxygen supply to the retina is critical for retinal function. In species with vascularised retinas, such as man, oxygen is delivered to the retina via a combination of the choroidal vascular bed, which lies immediately behind the retina, and the retinal vasculature, which lies within the inner retina. The high-oxygen demands of the retina, and the relatively sparse nature of the retinal vasculature, are thought to contribute to the particular vulnerability of the retina to vascular disease. A large proportion of retinal blindness is associated with diseases having a vascular component, and disrupted oxygen supply to the retina is likely to be a critical factor. Much attention has therefore been directed at determining the intraretinal oxygen environment in healthy and diseased eyes. Measurements of oxygen levels within the retina have largely been restricted to animal studies in which oxygen sensitive microelectrodes can be used to obtain high-resolution measurements of oxygen tension as a function of retinal depth. Such measurements can immediately identify which retinal layers are supplied with oxygen from the different vascular elements. Additionally, in the outer retinal layers, which do not have any intrinsic oxygen sources, the oxygen distribution can be analysed mathematically to quantify the oxygen consumption rate of specific retinal layers. This has revealed a remarkable heterogeneity of oxygen requirements of different components of the outer retina, with the inner segments of the photoreceptors being the dominant oxygen consumers. Since the presence of the retinal vasculature precludes such a simple quantitative analysis of local oxygen consumption within the inner retina, our understanding of the oxygen needs of the inner retinal components is much less complete. Although several lines of evidence suggest that in the more commonly studied species such as cat, pig, and rat, the oxygen demands of the inner retina as a whole is broadly comparable to that of the outer retina, exactly which cell layers within the inner retina have the most stringent oxygen demands is not known. This may be a critical issue if the cell types most at risk from disrupted oxygen supply are to be identified. This paper reviews our current understanding of the oxygen requirements of the inner and outer retina and presents new data and mathematical models which identify three dominant oxygen-consuming layers in the rat retina. These are the inner segments of the photoreceptors, the outer plexiform layer, and the deeper region of the inner plexiform layer. We also address the intriguing question of how the oxygen requirements of the inner retina are met in those species which naturally have a poorly vascularised, or even totally avascular retina. We present measurements of the intraretinal oxygen distribution in two species of laboratory animal possessing such retinas, the rabbit and the guinea pig. The rabbit has a predominantly avascular retina, with only a narrow band of retinal vasculature, and the guinea pig retina is completely avascular. Both these animals demonstrate species adaptations in which the oxygen requirement of their inner retinas are extremely low when compared to that of their outer retinas. This finding both uncovers a remarkable ability of the inner retina in avascular species to function in a low-oxygen environment, and also highlights the dangers of extrapolating findings from avascular retinas to infer metabolic requirements of vascularised retinas. Different species also demonstrate a marked diversity in the manner in which intraretinal oxygen distribution is influenced by increases in systemic oxygen level. In the vascularised rat retina, the inner retinal oxygen increase is muted by a combination of increased oxygen consumption and a reduction of net oxygen delivery from the retinal circulation. The avascular retina of the guinea pig demonstrated a novel and powerful regulatory mechanism that prevents any dramatic rise in choroidal oxygen levels and keeps retinal oxygen levels within the normal physiological range. In contrast, in the avascular regions of the rabbit retina the choroidal oxygen level passively follows the increase in systemic oxygenation, and there is a dramatic rise in oxygen level in all retinal layers. The presence or absence of oxygen-regulating mechanisms may well reflect important survival strategies for the retina which are not yet understood. Intraretinal oxygen measurements in rat models of retinal disease are also presented. We describe how oxygen distribution across the rat retina is influenced by manipulation of systemic blood pressure. We examine the effect of acute and chronic occlusion of the retinal vasculature, and explore the feasibility of meeting the oxygen needs of the ischemic retina from the choroid. (ABSTRACT TRUNCATED)