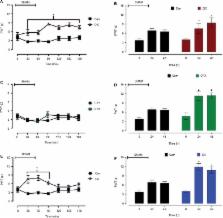 Ceftriaxone (CFX) and clavulanic acid (CA) are 2 β-lactam molecules widely used as antibiotics. However, several reports of their antiallodynic properties have been published in recent years. Although this effect has been considered mostly due to a GLT1 overexpression, these molecules have also been proven to induce direct immunomodulation. In this work, we determine the acute analgesic effect of CFX and CA in an inflammatory pain model and assess if their administration may induce anti-inflammatory effects.

The carrageenan (Carr) test was used as an inflammatory pain model. Both mechanical and thermal responses were analyzed after CFX and CA administration at different times. A plethysmometer was used to determine inflammation. Also, TNF-α and IL-10 serum concentrations were determined by enzyme-linked immunosorbent assay.

Both CFX and CA induced a significant thermal antiallodynic effect 3 and 24 h after administration. Furthermore, CA induced a mechanical antiallodynic effect 30, 60, and 90 min after administration. Moreover, a significant anti-inflammatory effect was found for both molecules 24 h after Carr injection. Also, both CA and CFX modulated TNF-α and IL-10 serum concentrations at different times.

Our results provide evidence that both CFX and CA cause an analgesic effect on a Carr inflammatory pain model and that said analgesic effect differs between each β-lactam molecule. Furthermore, this effect may be related to an anti-inflammatory effect of both molecules and a direct TNF-α and IL-10 serum concentration modulation.

A new and sensitive method for measuring thermal nociception in cutaneous hyperalgesia.

Mark Brown,  Sonia Flores,  R Dubner … (1987)
A method to measure cutaneous hyperalgesia to thermal stimulation in unrestrained animals is described. The testing paradigm uses an automated detection of the behavioral end-point; repeated testing does not contribute to the development of the observed hyperalgesia. Carrageenan-induced inflammation resulted in significantly shorter paw withdrawal latencies as compared to saline-treated paws and these latency changes corresponded to a decreased thermal nociceptive threshold. Both the thermal method and the Randall-Selitto mechanical method detected dose-related hyperalgesia and its blockade by either morphine or indomethacin. However, the thermal method showed greater bioassay sensitivity and allowed for the measurement of other behavioral parameters in addition to the nociceptive threshold.