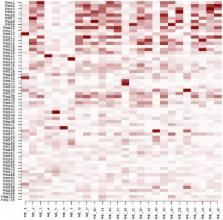 One major expectation from the transcriptome in humans is to characterize the biological basis of associations identified by genome-wide association studies. So far, few cis expression quantitative trait loci (eQTLs) have been reliably related to disease susceptibility. Trans-regulating mechanisms may play a more prominent role in disease susceptibility. We analyzed 12,808 genes detected in at least 5% of circulating monocyte samples from a population-based sample of 1,490 European unrelated subjects. We applied a method of extraction of expression patterns—independent component analysis—to identify sets of co-regulated genes. These patterns were then related to 675,350 SNPs to identify major trans-acting regulators. We detected three genomic regions significantly associated with co-regulated gene modules. Association of these loci with multiple expression traits was replicated in Cardiogenics, an independent study in which expression profiles of monocytes were available in 758 subjects. The locus 12q13 (lead SNP rs11171739), previously identified as a type 1 diabetes locus, was associated with a pattern including two cis eQTLs, RPS26 and SUOX, and 5 trans eQTLs, one of which ( MADCAM1) is a potential candidate for mediating T1D susceptibility. The locus 12q24 (lead SNP rs653178), which has demonstrated extensive disease pleiotropy, including type 1 diabetes, hypertension, and celiac disease, was associated to a pattern strongly correlating to blood pressure level. The strongest trans eQTL in this pattern was CRIP1, a known marker of cellular proliferation in cancer. The locus 12q15 (lead SNP rs11177644) was associated with a pattern driven by two cis eQTLs, LYZ and YEATS4, and including 34 trans eQTLs, several of them tumor-related genes. This study shows that a method exploiting the structure of co-expressions among genes can help identify genomic regions involved in trans regulation of sets of genes and can provide clues for understanding the mechanisms linking genome-wide association loci to disease.

One major expectation from the transcriptome in humans is to help characterize the biological basis of associations identified by genome-wide association studies. Here, we take advantage of recent technical and methodological advances to examine the influence of natural genetic variability on >12,000 genes expressed in the monocyte, a blood cell playing a key role in immunity-related disorders and atherosclerosis. By examining 1,490 European population-based subjects, we identify three regions of the genome reproducibly associated with specific patterns of gene expression. Two of these regions overlap genetic variants previously known to be involved in the susceptibility to type 1 diabetes, celiac disease, and hypertension. Genes whose expression is modulated by these genetic variants may act as mediators in the causal relationship linking the variability of the genome to complex disease. These findings illustrate how integration of genetic and transcriptomic data at an epidemiological scale can help decipher the genetic basis of complex diseases.

Mapping the Genetic Architecture of Gene Expression in Human Liver

Publisher ID: PGENETICS-D-11-01175
DOI: 10.1371/journal.pgen.1002367
PMC ID: 3228821
PubMed ID: 22144904
Copyright statement: Rotival et al. This is an open-access article distributed under the terms of the Creative Commons Attribution License, which permits unrestricted use, distribution, and reproduction in any medium, provided the original author and source are credited.