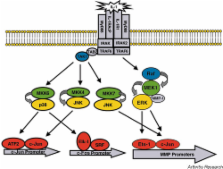 Matrix metalloproteinase (MMP)-1, MMP-8 and MMP-13 are interstitial collagenases that degrade type II collagen in cartilage; this is a committed step in the progression of rheumatoid arthritis and osteoarthritis. Of these enzymes, the expression of MMP-1 and MMP-13 is substantially increased in response to IL-1 and tumor necrosis factor-α, and elevated levels of these collagenases are observed in arthritic tissues. Therefore, cytokine-mediated MMP-1 and MMP-13 gene regulation is an important issue in arthritis research. In this review, we discuss current models of MMP-1 and MMP-13 transcriptional regulation, with a focus on signaling intermediates and transcription factors that may be future targets for the development of new arthritis drugs.

Signal transduction by the JNK group of MAP kinases.

Yehezkel Ben-Ari,  M Karin (1999)
NF-kappaB (nuclear factor-kappaB) is a collective name for inducible dimeric transcription factors composed of members of the Rel family of DNA-binding proteins that recognize a common sequence motif. NF-kappaB is found in essentially all cell types and is involved in activation of an exceptionally large number of genes in response to infections, inflammation, and other stressful situations requiring rapid reprogramming of gene expression. NF-kappaB is normally sequestered in the cytoplasm of nonstimulated cells and consequently must be translocated into the nucleus to function. The subcellular location of NF-kappaB is controlled by a family of inhibitory proteins, IkappaBs, which bind NF-kappaB and mask its nuclear localization signal, thereby preventing nuclear uptake. Exposure of cells to a variety of extracellular stimuli leads to the rapid phosphorylation, ubiquitination, and ultimately proteolytic degradation of IkappaB, which frees NF-kappaB to translocate to the nucleus where it regulates gene transcription. NF-kappaB activation represents a paradigm for controlling the function of a regulatory protein via ubiquitination-dependent proteolysis, as an integral part of a phosphorylationbased signaling cascade. Recently, considerable progress has been made in understanding the details of the signaling pathways that regulate NF-kappaB activity, particularly those responding to the proinflammatory cytokines tumor necrosis factor-alpha and interleukin-1. The multisubunit IkappaB kinase (IKK) responsible for inducible IkappaB phosphorylation is the point of convergence for most NF-kappaB-activating stimuli. IKK contains two catalytic subunits, IKKalpha and IKKbeta, both of which are able to correctly phosphorylate IkappaB. Gene knockout studies have shed light on the very different physiological functions of IKKalpha and IKKbeta. After phosphorylation, the IKK phosphoacceptor sites on IkappaB serve as an essential part of a specific recognition site for E3RS(IkappaB/beta-TrCP), an SCF-type E3 ubiquitin ligase, thereby explaining how IKK controls IkappaB ubiquitination and degradation. A variety of other signaling events, including phosphorylation of NF-kappaB, hyperphosphorylation of IKK, induction of IkappaB synthesis, and the processing of NF-kappaB precursors, provide additional mechanisms that modulate the level and duration of NF-kappaB activity.