Characterization of Sodium Channel Mutations in the Dengue Vector Mosquitoes Aedes aegypti and Aedes albopictus within the Context of Ongoing Wolbachia Releases in Kuala Lumpur, Malaysia 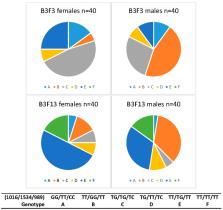 Mosquitoes, Aedes aegypti and Ae. albopictus are vectors of dengue and must be controlled to prevent and contain outbreaks of this disease. Control by insecticide application is common and pyrethroid insecticides provide rapid knockdown of mosquitoes combined with relatively low mammalian toxicity. However, resistance to pyrethroids and other chemicals is causing problems for mosquito control around the world. In Malaysia, an alternative method of dengue reduction is employed which comprises releases of Ae. aegypti mosquitoes infected with a bacterium, Wolbachia, found naturally in other insects. Wolbachia turns the mosquitoes into incompetent vectors so they do not transmit the disease. Wolbachia mosquitoes are reared in the laboratory before release and must be able to survive in the field where they will encounter insecticides. Our study demonstrates benefits of crossing laboratory mosquitoes to those from the field over generations, so that the mosquito lines acquire field resistance characteristics (mutations in the sodium channel gene). We demonstrate that resistance mutations provide a survival advantage to Wolbachia Ae. aegypti mosquitoes, which must be maintained in laboratory lines by regular backcrossing. We also describe appearance of a sodium channel mutation in Malaysian Ae. albopictus which may indicate that pyrethroid resistance is increasing in this species.

Specific sodium channel gene mutations confer target site resistance to pyrethroid insecticides in mosquitoes and other insects. In Aedes mosquito species, multiple mutations that contribute to resistance vary in their importance around the world. Here, we characterize voltage sensitive sodium channel ( Vssc) mutations in populations of Aedes aegypti from Kuala Lumpur, Malaysia, and look at their persistence in populations affected by ongoing Wolbachia releases (a dengue control measure). We also describe a Vssc mutation in Aedes albopictus (F1534L) found for the first time in Malaysia. We show that there are three predominant Vssc haplotypes in Aedes aegypti in this region, which all persist with regular backcrossing, thereby maintaining the original genetic composition of the populations. We identify changes in genotype frequency in closed populations of Ae. aegypti maintained for multiple generations in laboratory culture, suggesting different fitness costs associated with the genotypes, some of which may be associated with the sex of the mosquito. Following population replacement of Ae. aegypti by Wolbachia in the target area, however, we find that the Vssc mutations have persisted at pre-release levels. Mosquitoes in two genotype classes demonstrate a type I pyrethroid resistance advantage over wildtype mosquitoes when exposed to 0.25% permethrin. This resistance advantage is even more pronounced with a type II pyrethroid, deltamethrin (0.03%). The results point to the importance of these mutations in pyrethroid resistance in mosquito populations and the need for regular backcrossing with male mosquitoes from the field to maintain similarity of genetic background and population integrity during Wolbachia releases.

Boris Zhorov,  Crystal Y. Q. Du,  Gul Satar … (2013)
Pyrethroid insecticides are widely used as one of the most effective control measures in the global fight against agricultural arthropod pests and mosquito-borne diseases, including malaria and dengue. They exert toxic effects by altering the function of voltage-gated sodium channels, which are essential for proper electrical signaling in the nervous system. A major threat to the sustained use of pyrethroids for vector control is the emergence of mosquito resistance to pyrethroids worldwide. Here, we report the successful expression of a sodium channel, AaNav1-1, from Aedes aegypti in Xenopus oocytes, and the functional examination of nine sodium channel mutations that are associated with pyrethroid resistance in various Ae. aegypti and Anopheles gambiae populations around the world. Our analysis shows that five of the nine mutations reduce AaNav1-1 sensitivity to pyrethroids. Computer modeling and further mutational analysis revealed a surprising finding: Although two of the five confirmed mutations map to a previously proposed pyrethroid-receptor site in the house fly sodium channel, the other three mutations are mapped to a second receptor site. Discovery of this second putative receptor site provides a dual-receptor paradigm that could explain much of the molecular mechanisms of pyrethroid action and resistance as well as the high selectivity of pyrethroids on insect vs. mammalian sodium channels. Results from this study could impact future prediction and monitoring of pyrethroid resistance in mosquitoes and other arthropod pests and disease vectors.

Leticia Smith,  Shinji Kasai,  Jeffrey G Scott (2016)
Aedes aegypti and A. albopictus mosquitoes are vectors of important human disease viruses, including dengue, yellow fever, chikungunya and Zika. Pyrethroid insecticides are widely used to control adult Aedes mosquitoes, especially during disease outbreaks. Herein, we review the status of pyrethroid resistance in A. aegypti and A. albopictus, mechanisms of resistance, fitness costs associated with resistance alleles and provide suggestions for future research. The widespread use of pyrethroids has given rise to many populations with varying levels of resistance worldwide, albeit with substantial geographical variation. In adult A. aegypti and A. albopictus, resistance levels are generally lower in Asia, Africa and the USA, and higher in Latin America, although there are exceptions. Susceptible populations still exist in several areas of the world, particularly in Asia and South America. Resistance to pyrethroids in larvae is also geographically widespread. The two major mechanisms of pyrethroid resistance are increased detoxification due to P450-monooxygenases, and mutations in the voltage sensitive sodium channel (Vssc) gene. Several P450s have been putatively associated with insecticide resistance, but the specific P450s involved are not fully elucidated. Pyrethroid resistance can be due to single mutations or combinations of mutations in Vssc. The presence of multiple Vssc mutations can lead to extremely high levels of resistance. Suggestions for future research needs are presented.

High-throughput assays for detection of the F1534C mutation in the voltage-gated sodium channel gene in permethrin-resistant Aedes aegypti and the distribution of this mutation throughout Thailand.

Woottichai Nachaiwieng,  L Prapanthadara,  Puckavadee Somwang … (2011)
To develop rapid monitoring tools to detect the F1534C permethrin-resistance mutation in domain IIIS6 of the Aedes aegypti voltage-gated sodium channel gene and determine the frequency and distribution of this mutation in Thailand. A TaqMan SNP genotyping and an allele specific PCR (AS-PCR) assay were developed and validated by comparison with DNA sequencing of homozygous susceptible and homozygous resistant laboratory strains, their reciprocal-cross progenies, and field-caught mosquitoes. To determine the resistance phenotype of wild-caught A. aegypti, mosquitoes were exposed to 0.75% permethrin paper. The AS-PCR assay was used to screen 619 individuals from 20 localities throughout Thailand. Overall, both assays gave results consistent with DNA sequencing for laboratory strains of known genotype and for wild-caught A. aegypti. The only slight discrepancy was for the AS-PCR method, which overestimated the mutant allele frequency by 1.8% in wild-caught samples. AS-PCR assays of permethrin-exposed samples show that the mutant C1534 allele is very closely associated with the resistant phenotype. However, 19 permethrin-resistant individuals were homozygous for the wild-type F1534 allele. DNA sequencing revealed all these individuals were homozygous for two other mutations in domain II, V1016G and S989P, which are known to confer resistance (Srisawat et al. 2010). The F1534C mutation is widespread in Thailand with mutant allele frequencies varying among populations from 0.20 to 1.00. These assays can be used for the rapid detection of the F1534C resistance mutation in A. aegypti populations. The F1534C, and other, mutations underlie an extremely high prevalence of pyrethroid resistance in Thailand. © 2011 Blackwell Publishing Ltd.