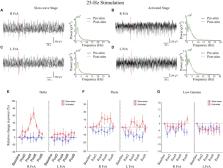 The cerebellum is involved in sensorimotor, cognitive, and emotional functions through cerebello-cerebral connectivity. Cerebellar neurostimulation thus likely affects cortical circuits, as has been shown in studies using cerebellar stimulation to treat neurological disorders through modulation of frontal EEG oscillations. Here we studied the effects of different frequencies of cerebellar stimulation on oscillations and coherence in the cerebellum and prefrontal cortex in the urethane-anesthetized rat. Local field potentials were recorded in the right lateral cerebellum (Crus I/II) and bilaterally in the prefrontal cortex (frontal association area, FrA) in adult male Sprague-Dawley rats. Stimulation was delivered to the cerebellar vermis (lobule VII) using single pulses (0.2 Hz for 60 s), or repeated pulses at 1 Hz (30 s), 5 Hz (10 s), 25 Hz (2 s), and 50 Hz (1 s). Effects of stimulation were influenced by the initial state of EEG activity which varies over time during urethane-anesthesia; 1 Hz stimulation was more effective when delivered during the slow-wave state (Stage 1), while stimulation with single-pulse, 25, and 50 Hz showed stronger effects during the activated state (Stage 2). Single-pulses resulted in increases in oscillatory power in the delta and theta bands for the cerebellum, and in frequencies up to 80 Hz in cortical sites. 1 Hz stimulation induced a decrease in 0–30 Hz activity and increased activity in the 30–200 Hz range, in the right FrA. 5 Hz stimulation reduced power in high frequencies in Stage 1 and induced mixed effects during Stage 2.25 Hz stimulation increased cortical power at low frequencies during Stage 2, and increased power in higher frequency bands during Stage 1. Stimulation at 50 Hz increased delta-band power in all recording sites, with the strongest and most rapid effects in the cerebellum. 25 and 50 Hz stimulation also induced state-dependent effects on cerebello-cortical and cortico-cortical coherence at high frequencies. Cerebellar stimulation can therefore entrain field potential activity in the FrA and drive synchronization of cerebello-cortical and cortico-cortical networks in a frequency-dependent manner. These effects highlight the role of the cerebellar vermis in modulating large-scale synchronization of neural networks in non-motor frontal cortex.

Matthias Engel,  Steven Singer,  Pascal Fries (2001)
Classical theories of sensory processing view the brain as a passive, stimulus-driven device. By contrast, more recent approaches emphasize the constructive nature of perception, viewing it as an active and highly selective process. Indeed, there is ample evidence that the processing of stimuli is controlled by top-down influences that strongly shape the intrinsic dynamics of thalamocortical networks and constantly create predictions about forthcoming sensory events. We discuss recent experiments indicating that such predictions might be embodied in the temporal structure of both stimulus-evoked and ongoing activity, and that synchronous oscillations are particularly important in this process. Coherence among subthreshold membrane potential fluctuations could be exploited to express selective functional relationships during states of expectancy or attention, and these dynamic patterns could allow the grouping and selection of distributed neuronal responses for further processing.

Consensus paper: pathological role of the cerebellum in autism.

S Hossein Fatemi,  Kimberly A Aldinger,  Paul Ashwood … (2012)
There has been significant advancement in various aspects of scientific knowledge concerning the role of cerebellum in the etiopathogenesis of autism. In the current consensus paper, we will observe the diversity of opinions regarding the involvement of this important site in the pathology of autism. Recent emergent findings in literature related to cerebellar involvement in autism are discussed, including: cerebellar pathology, cerebellar imaging and symptom expression in autism, cerebellar genetics, cerebellar immune function, oxidative stress and mitochondrial dysfunction, GABAergic and glutamatergic systems, cholinergic, dopaminergic, serotonergic, and oxytocin-related changes in autism, motor control and cognitive deficits, cerebellar coordination of movements and cognition, gene-environment interactions, therapeutics in autism, and relevant animal models of autism. Points of consensus include presence of abnormal cerebellar anatomy, abnormal neurotransmitter systems, oxidative stress, cerebellar motor and cognitive deficits, and neuroinflammation in subjects with autism. Undefined areas or areas requiring further investigation include lack of treatment options for core symptoms of autism, vermal hypoplasia, and other vermal abnormalities as a consistent feature of autism, mechanisms underlying cerebellar contributions to cognition, and unknown mechanisms underlying neuroinflammation.