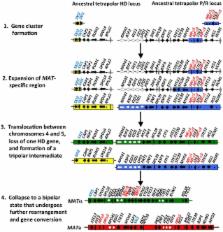 Sexual reproduction in fungi is governed by a specialized genomic region called the mating-type locus ( MAT). The human fungal pathogenic and basidiomycetous yeast Cryptococcus neoformans has evolved a bipolar mating system ( a, α) in which the MAT locus is unusually large (>100 kb) and encodes >20 genes including homeodomain (HD) and pheromone/receptor (P/R) genes. To understand how this unique bipolar mating system evolved, we investigated MAT in the closely related species Tsuchiyaea wingfieldii and Cryptococcus amylolentus and discovered two physically unlinked loci encoding the HD and P/R genes. Interestingly, the HD (B) locus sex-specific region is restricted (∼2 kb) and encodes two linked and divergently oriented homeodomain genes in contrast to the solo HD genes ( SXI1α, SXI2 a) of C. neoformans and Cryptococcus gattii. The P/R (A) locus contains the pheromone and pheromone receptor genes but has expanded considerably compared to other outgroup species ( Cryptococcus heveanensis) and is linked to many of the genes also found in the MAT locus of the pathogenic Cryptococcus species. Our discovery of a heterothallic sexual cycle for C. amylolentus allowed us to establish the biological roles of the sex-determining regions. Matings between two strains of opposite mating-types (A1B1×A2B2) produced dikaryotic hyphae with fused clamp connections, basidia, and basidiospores. Genotyping progeny using markers linked and unlinked to MAT revealed that meiosis and uniparental mitochondrial inheritance occur during the sexual cycle of C. amylolentus. The sexual cycle is tetrapolar and produces fertile progeny of four mating-types (A1B1, A1B2, A2B1, and A2B2), but a high proportion of progeny are infertile, and fertility is biased towards one parental mating-type (A1B1). Our studies reveal insights into the plasticity and transitions in both mechanisms of sex determination (bipolar versus tetrapolar) and sexual reproduction (outcrossing versus inbreeding) with implications for similar evolutionary transitions and processes in fungi, plants, and animals.

Vernita Gordon,  Aaron Abajian,  Mark P. Green (1998)
Sequencing of large clones or small genomes is generally done by the shotgun approach (Anderson et al. 1982). This has two phases: (1) a shotgun phase in which a number of reads are generated from random subclones and assembled into contigs, followed by (2) a directed, or finishing phase in which the assembly is inspected for correctness and for various kinds of data anomalies (such as contaminant reads, unremoved vector sequence, and chimeric or deleted reads), additional data are collected to close gaps and resolve low quality regions, and editing is performed to correct assembly or base-calling errors. Finishing is currently a bottleneck in large-scale sequencing efforts, and throughput gains will depend both on reducing the need for human intervention and making it as efficient as possible. We have developed a finishing tool, consed, which attempts to implement these principles. A distinguishing feature relative to other programs is the use of error probabilities from our programs phred and phrap as an objective criterion to guide the entire finishing process. More information is available at http:// www.genome.washington.edu/consed/consed. html.

Sexual reproduction between partners of the same mating type in Cryptococcus neoformans.

Joseph Heitman,  Damien C. Hull,  Xiaorong Lin (2005)
Cryptococcus neoformans is a globally distributed human fungal pathogen that causes life-threatening meningoencephalitis in immunocompromised patients. It has a defined sexual cycle involving haploid cells of alpha and a mating types, yet the vast majority of environmental and clinical isolates are alpha (ref. 3). Sexual recombination is normally expected to occur between isolates of opposite mating type in organisms with two mating types (or sexes). How sexual reproductive potential can be maintained in an organism with a largely unisexual, nearly clonal population genetic structure is unknown. One clue, however, is that alpha strains undergo fruiting, a process that resembles sexual mating but is thought to be strictly mitotic and asexual. We report here that hallmarks of mating occur during fruiting, including diploidization and meiosis. Pheromone response pathway elements and the key meiotic regulator Dmc1 are required for efficient fruiting. Furthermore, fusion and meiosis can occur between non-isogenic alpha strains, enabling genetic exchange. These studies reveal how sexual reproduction can occur between partners of the same mating type. These findings have implications for the evolution of microbial pathogens, as well as for parthenogenesis, cell fusion events and transitions between self-fertilizing and outcrossing modes of reproduction observed in both fungi and other kingdoms.

Publisher ID: PGENETICS-D-11-01918
DOI: 10.1371/journal.pgen.1002528
PMC ID: 3280970
PubMed ID: 22359516
Copyright statement: This is an open-access article, free of all copyright, and may be freely reproduced, distributed, transmitted, modified, built upon, or otherwise used by anyone for any lawful purpose. The work is made available under the Creative Commons CC0 public domain dedication.