Understanding the Lexicon of Fatigue in Parkinson’s Disease 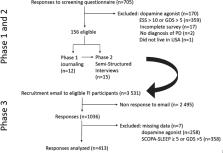 Fatigue in Parkinson’s disease (PD) is multifaceted and associated with reduced quality of life. In turn, the language used by people with PD to describe fatigue is variable and poorly understood. We sought to elucidate the lexicon of fatigue using a qualitative grounded theory approach.

The objective of this study was to understand how patients with PD describe fatigue.

A pre-study phase of online journaling (Phase 1) provided information regarding topics of importance to patients. Following this, two independent samples of fatigued subjects were studied. Individuals with PD participated in a telephone interview (Phase 2); interview transcripts were analyzed to develop a detailed codebook. To ensure trustworthiness of the findings, an online survey (Phase 3) was administered to individuals with self-reported PD participating in the online study Fox Insight. The survey included the following question: “How do you define fatigue? Please provide your definition in the space below.” The codebook developed from Phase 2 was applied to the Phase 3 responses.

Fifteen individuals participated in Phase 2 and 413 individuals completed Phase 3. Fatigue was subdivided into three domains: cognitive, emotional, and physical. Nearly all individuals experienced more than one domain of fatigue. The most common themes included tiredness, lack of energy, and negative motivation.

Fatigue in PD is multidimensional. Questionnaires that only assess the physical impact of fatigue may not be adequate to capture the broad range of experiences of fatigue among people with PD.

Choose your method: a comparison of phenomenology, discourse analysis, and grounded theory.

Susan Trinidad,  Helene Starks (2007)
The purpose of this article is to compare three qualitative approaches that can be used in health research: phenomenology, discourse analysis, and grounded theory. The authors include a model that summarizes similarities and differences among the approaches, with attention to their historical development, goals, methods, audience, and products. They then illustrate how these approaches differ by applying them to the same data set. The goal in phenomenology is to study how people make meaning of their lived experience; discourse analysis examines how language is used to accomplish personal, social, and political projects; and grounded theory develops explanatory theories of basic social processes studied in context. The authors argue that by familiarizing themselves with the origins and details of these approaches, researchers can make better matches between their research question(s) and the goals and products of the study.

The short form of the Geriatric Depression Scale: a comparison with the 30-item form.

W J Burke,  W Roccaforte,  S P Wengel (2015)
The Geriatric Depression Scale (GDS) exists in both short and long forms. The original 30-item form of the GDS has been shown to be an effective screening test for depression in a variety of settings. However, its utility in patients with dementia of the Alzheimer type (DAT) is questionable. The short, 15-item version of the GDS was developed primarily for brevity and, in particular, for use in populations such as the medically ill or those with dementia, where the longer form might be burdensome. How well this short form works in these populations, however, is largely undetermined. In this paper, the sensitivity and specificity of the 15- and 30-item GDS are compared in a group of patients who were either cognitively intact or had mild DAT. The findings suggest that the short version of the GDS, like its longer predecessor, is an effective screening tool in the cognitively intact. However, in a population of subjects with mild DAT, it does not appear to retain its validity.

R.G. Brown,  A Dittner,  L. Findley … (2005)
In recent years several studies have highlighted the clinical significance of fatigue in Parkinson's disease. While we are becoming aware of its prevalence and impact on the lives of patient, little progress has been made in understanding its nature or aetiology, nor on finding ways to manage the problem clinically. One possible reason for the slow pace of progress is the lack of an appropriate instrument to measure fatigue in Parkinson's disease and related disorders. While assessment tools have been developed for assessing fatigue associated with other diseases, their use in patients with Parkinsonism can pose problems and their validity cannot be assumed. In an attempt to progress research and improve clinical management a new instrument is presented, the Parkinson Fatigue Scale. This 16-item self-report instrument (the PFS-16) arose from statements by individuals with Parkinsonism experiencing fatigue. Initially tested on a sample of almost 500 patients, and subsequently on an independent sample of over 100. The PFS-16 scale was designed to tap a single construct encompassing the physical aspects fatigue and their impact on the patient's daily function. The scale deliberately excludes emotional and cognitive features that may occur as part of the fatigue experience but which may also occur independently in Parkinsonism. The scale has good intrinsic properties and satisfactory test-retest reliability. It shows reasonable associations with other measures of fatigue and is able to identify patients who self-report the presence of fatigue, and particularly those in whom fatigue is a problem. Cut-off scores are provided in both cases with good specificity and sensitivity. While further evaluation is required, the scale is offered to facilitate clinical practice and future research. It is hoped that its use will enable the improved understanding and clinical management of this important problem.

This is an open access article distributed under the terms of the Creative Commons Attribution (CC BY 4.0) License.