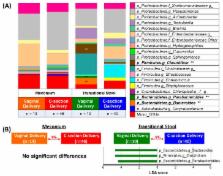 Cesarean (C-section) delivery, recently shown to cause excess weight gain in mice, perturbs human neonatal gut microbiota development due to the lack of natural mother-to-newborn transfer of microbes. Neonates excrete first the in-utero intestinal content (referred to as meconium) hours after birth, followed by intestinal contents reflective of extra-uterine exposure (referred to as transition stool) 2 to 3 days after birth. It is not clear when the effect of C-section on the neonatal gut microbiota emerges. We examined bacterial DNA in carefully-collected meconium, and the subsequent transitional stool, from 59 neonates [13 born by scheduled C-section and 46 born by vaginal delivery] in a private hospital in Brazil. Bacterial DNA was extracted, and the V4 region of the 16S rRNA gene was sequenced using the Illumina MiSeq (San Diego, CA, USA) platform. We found evidence of bacterial DNA in the majority of meconium samples in our study. The bacterial DNA structure (i.e., beta diversity) of meconium differed significantly from that of the transitional stool microbiota. There was a significant reduction in bacterial alpha diversity (e.g., number of observed bacterial species) and change in bacterial composition (e.g., reduced Proteobacteria) in the transition from meconium to stool. However, changes in predicted microbiota metabolic function from meconium to transitional stool were only observed in vaginally-delivered neonates. Within sample comparisons showed that delivery mode was significantly associated with bacterial structure, composition and predicted microbiota metabolic function in transitional-stool samples, but not in meconium samples. Specifically, compared to vaginally delivered neonates, the transitional stool of C-section delivered neonates had lower proportions of the genera Bacteroides, Parabacteroides and Clostridium. These differences led to C-section neonates having lower predicted abundance of microbial genes related to metabolism of amino and nucleotide sugars, and higher abundance of genes related to fatty-acid metabolism, amino-acid degradation and xenobiotics biodegradation. In summary, microbiota diversity was reduced in the transition from meconium to stool, and the association of delivery mode with microbiota structure, composition and predicted metabolic function was not observed until the passing of the transitional stool after meconium.

Mercedes Gomez de Agüero,  Stephanie C Ganal-Vonarburg,  Tobias Fuhrer … (2016)
Postnatal colonization of the body with microbes is assumed to be the main stimulus to postnatal immune development. By transiently colonizing pregnant female mice, we show that the maternal microbiota shapes the immune system of the offspring. Gestational colonization increases intestinal group 3 innate lymphoid cells and F4/80(+)CD11c(+) mononuclear cells in the pups. Maternal colonization reprograms intestinal transcriptional profiles of the offspring, including increased expression of genes encoding epithelial antibacterial peptides and metabolism of microbial molecules. Some of these effects are dependent on maternal antibodies that potentially retain microbial molecules and transmit them to the offspring during pregnancy and in milk. Pups born to mothers transiently colonized in pregnancy are better able to avoid inflammatory responses to microbial molecules and penetration of intestinal microbes.

Impact of maternal intrapartum antibiotics, method of birth and breastfeeding on gut microbiota during the first year of life: a prospective cohort study.

M Azad,  T Konya,  R Persaud … (2016)
Dysbiosis of the infant gut microbiota may have long-term health consequences. This study aimed to determine the impact of maternal intrapartum antibiotic prophylaxis (IAP) on infant gut microbiota, and to explore whether breastfeeding modifies these effects.