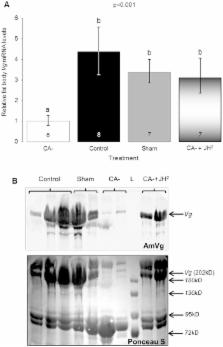 The evolution of advanced sociality in bees is associated with apparent modifications in juvenile hormone (JH) signaling. By contrast to most insects in which JH is a gonadotropin regulating female fertility, in the highly eusocial honey bee ( Apis mellifera) JH has lost its gonadotrophic function in adult females, and instead regulates age-related division of labor among worker bees. In order to shed light on the evolution of JH signaling in bees we performed allatectomy and replacement therapies to manipulate JH levels in workers of the "primitively eusocial" bumblebee Bombus terrestris. Allatectomized worker bees showed remarkable reduction in ovarian development, egg laying, Vitellogenin and Krüppel homolog 1 fat body transcript levels, hemolymph Vitellogenin protein abundance, wax secretion, and egg-cell construction. These effects were reverted, at least partially, by treating allatectomized bees with JH-III, the natural JH of bees. Allatectomy also affected the amount of ester component in Dufour's gland secretion, which is thought to convey a social signal relating to worker fertility. These findings provide a strong support for the hypothesis that in contrast to honey bees, JH is a gonadotropin in bumblebees and lend credence to the hypothesis that the evolution of advanced eusociality in honey bees was associated with major modifications in JH signaling.

Gro Amdam,  Kari Norberg,  Stig Omholt … (2003)
Vitellogenin is a female-specific glucolipoprotein yolk precursor produced by all oviparous animals. Vitellogenin expression is under hormonal control, and the protein is generally synthesized directly before yolk deposition. In the honeybee (Apis mellifera), vitellogenin is not only synthesized by the reproductive queen, but also by the functionally sterile workers. In summer, the worker population consists of a hive bee group performing a multitude of tasks including nursing inside the nest, and a forager group specialized in collecting nectar, pollen, water, and propolis. Vitellogenin is synthesized in large quantities by hive bees. When hive bees develop into foragers, their juvenile hormone titers increase, and this causes cessation of their vitellogenin production. This inverse relationship between vitellogenin synthesis and juvenile hormone is opposite to the norm in insects, and the underlying proximate processes and life-history reasons are still not understood. Here we document an alternative use of vitellogenin by showing that it is a source for the proteinaceous royal jelly that is produced by the hive bees. Hive bees use the jelly to feed larvae, queen, workers, and drones. This finding suggests that the evolution of a brood-rearing worker class and a specialized forager class in an advanced eusocial insect society has been directed by an alternative utilization of yolk protein.

Chieka Minakuchi,  Toshiki Namiki,  Tetsuro Shinoda (2009)
Juvenile hormone (JH) prevents ecdysone-induced metamorphosis in insects. However, our knowledge of the molecular mechanisms of JH action is still fragmented. Krüppel homolog 1 (Kr-h1) is a JH-inducible transcription factor in Drosophila melanogaster (Minakuchi, C., Zhou, X., Riddiford, L.M., 2008b. Krüppel homolog 1 (Kr-h1) mediates juvenile hormone action during metamorphosis of Drosophila melanogaster. Mech. Dev. 125, 91-105). Analysis of expression of the homologous gene (TcKr-h1) in the beetle Tribolium castaneum showed that its transcript was continuously present in the larval stage but absent in the pupal stage. Artificial suppression of JH biosynthesis in the larval stage caused a precocious larval-pupal transition and a down-regulation of TcKr-h1 mRNA. RNAi-mediated knockdown of TcKr-h1 in the larval stage induced a precocious larval-pupal transition. In the early pupal stage, treatment with an exogenous JH mimic (JHM) caused formation of a second pupa, and a rapid and large induction of TcKr-h1 transcription. JHM-induced formation of a second pupa was counteracted by the knockdown of TcKr-h1. RNAi experiments in combination with JHM treatment demonstrated that in the larval stage TcKr-h1 works downstream of the putative JH receptor Methoprene-tolerant (TcMet), and in the pupal stage it works downstream of TcMet and upstream of the pupal specifier broad (Tcbr). Therefore, TcKr-h1 is an early JH-response gene that mediates JH action linking TcMet and Tcbr.

This work was supported by United States - Israel Binational Agricultural Research and Development Fund, #IS-4418-11, http://www.bard-isus.com to GB; US-Israel Binational Science Foundation - BSF #2007465, http://www.bsf.org.il/BSFPublic/Default.aspx to GB and GVA; the "Hoffman Leadership and Responsibility" doctoral scholarship to HS; and the Vaadia-BARD Postdoctoral Fellowship Award No. FI-462-2012 from BARD to HS. The funders had no role in study design, data collection and analysis, decision to publish, or preparation of the manuscript.