First two months of the 2019 Coronavirus Disease (COVID-19) epidemic in China: real-time surveillance and evaluation with a second derivative model 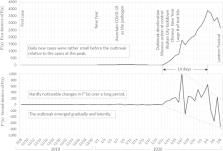 Similar to outbreaks of many other infectious diseases, success in controlling the novel 2019 coronavirus infection requires a timely and accurate monitoring of the epidemic, particularly during its early period with rather limited data while the need for information increases explosively.

In this study, we used a second derivative model to characterize the coronavirus epidemic in China with cumulatively diagnosed cases during the first 2 months. The analysis was further enhanced by an exponential model with a close-population assumption. This model was built with the data and used to assess the detection rate during the study period, considering the differences between the true infections, detectable and detected cases.

Results from the second derivative modeling suggest the coronavirus epidemic as nonlinear and chaotic in nature. Although it emerged gradually, the epidemic was highly responsive to massive interventions initiated on January 21, 2020, as indicated by results from both second derivative and exponential modeling analyses. The epidemic started to decelerate immediately after the massive actions. The results derived from our analysis signaled the decline of the epidemic 14 days before it eventually occurred on February 4, 2020. Study findings further signaled an accelerated decline in the epidemic starting in 14 days on February 18, 2020.

The coronavirus epidemic appeared to be nonlinear and chaotic, and was responsive to effective interventions. The methods used in this study can be applied in surveillance to inform and encourage the general public, public health professionals, clinicians and decision-makers to take coordinative and collaborative efforts to control the epidemic.

James Truscott,  Christophe Fraser,  Simon Cauchemez … (2011)
Seasonal influenza has considerable impact around the world, both economically and in mortality among risk groups, but there is considerable uncertainty as to the essential mechanisms and their parametrization. In this paper, we identify a number of characteristic features of influenza incidence time series in temperate regions, including ranges of annual attack rates and outbreak durations. By constraining the output of simple models to match these characteristic features, we investigate the role played by population heterogeneity, multiple strains, cross-immunity and the rate of strain evolution in the generation of incidence time series. Results indicate that an age-structured model with non-random mixing and co-circulating strains are both required to match observed time-series data. Our work gives estimates of the seasonal peak basic reproduction number, R 0, in the range 1.6–3. Estimates of R 0 are strongly correlated with the timescale for waning of immunity to current circulating seasonal influenza strain, which we estimate is between 3 and 8 years. Seasonal variation in transmissibility is largely confined to 15–30% of its mean value. While population heterogeneity and cross-immunity are required mechanisms, the degree of heterogeneity and cross-immunity is not tightly constrained. We discuss our findings in the context of other work fitting to seasonal influenza data.

Benjamin Dalziel,  Ottar N. Bjørnstad,  Willem G. van Panhuis … (2016)
Epidemics of infectious diseases often occur in predictable limit cycles. Theory suggests these cycles can be disrupted by high amplitude seasonal fluctuations in transmission rates, resulting in deterministic chaos. However, persistent deterministic chaos has never been observed, in part because sufficiently large oscillations in transmission rates are uncommon. Where they do occur, the resulting deep epidemic troughs break the chain of transmission, leading to epidemic extinction, even in large cities. Here we demonstrate a new path to locally persistent chaotic epidemics via subtle shifts in seasonal patterns of transmission, rather than through high-amplitude fluctuations in transmission rates. We base our analysis on a comparison of measles incidence in 80 major cities in the prevaccination era United States and United Kingdom. Unlike the regular limit cycles seen in the UK, measles cycles in US cities consistently exhibit spontaneous shifts in epidemic periodicity resulting in chaotic patterns. We show that these patterns were driven by small systematic differences between countries in the duration of the summer period of low transmission. This example demonstrates empirically that small perturbations in disease transmission patterns can fundamentally alter the regularity and spatiotemporal coherence of epidemics.