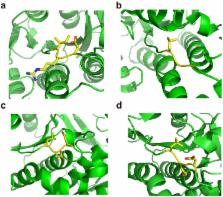 In the biosynthesis of polyketides, ketoreductases (KRs) are an important group of enzymes that determine the chiralities of the carbon backbones. SiaM is a special member of this group that can recognize substrates with different lengths and can be used iteratively. Here we report the crystal structure of SiaM. Structural analysis indicates that the overall structure resembles those of other KRs. However, significant disparity can be found in the conserved LDD motif that is replaced with IRD motif in SiaM. The isoleucine and aspartic acid residues take similar orientations as leucine and aspartic acid in the conserved LDD motif, while the arginine residue points out towards the solvent. PISA analysis shows that SiaM forms a tetramer. Several aromatic residues are found in the interfaces, which have aromatic stacking interactions with the aromatic residues in the neighboring protomers. Mutagenesis studies performed on the aromatic residues show that these sites are important for maintaining the structural integrity of SiaM. However, the aromatic residues contribute differently to the enzymatic activity. In the N-terminal interface, the aromatic residues can be replaced with leucine without affecting the enzymatic activity while, in the other interface, such mutations abolish the enzymatic activity.

Comparison of super-secondary structures in proteins.

Critical residues for structure and catalysis in short-chain dehydrogenases/reductases.

Udo Oppermann,  Heinz Berndt,  Charlotta Filling … (2002)
Short-chain dehydrogenases/reductases form a large, evolutionarily old family of NAD(P)(H)-dependent enzymes with over 60 genes found in the human genome. Despite low levels of sequence identity (often 10-30%), the three-dimensional structures display a highly similar alpha/beta folding pattern. We have analyzed the role of several conserved residues regarding folding, stability, steady-state kinetics, and coenzyme binding using bacterial 3beta/17beta-hydroxysteroid dehydrogenase and selected mutants. Structure determination of the wild-type enzyme at 1.2-A resolution by x-ray crystallography and docking analysis was used to interpret the biochemical data. Enzyme kinetic data from mutagenetic replacements emphasize the critical role of residues Thr-12, Asp-60, Asn-86, Asn-87, and Ala-88 in coenzyme binding and catalysis. The data also demonstrate essential interactions of Asn-111 with active site residues. A general role of its side chain interactions for maintenance of the active site configuration to build up a proton relay system is proposed. This extends the previously recognized catalytic triad of Ser-Tyr-Lys residues to form a tetrad of Asn-Ser-Tyr-Lys in the majority of characterized short-chain dehydrogenases/reductase enzymes.

Douglas A Jabs,  Marjan Weiss,  M Brandl … (2001)
A non-redundant set of 1154 protein structures from the Protein Data Bank was examined with respect to close interactions between C-H-donor and pi-acceptor groups. A total of 31,087 interactions were found to satisfy our selection criteria. Their geometric parameters suggest that these interactions can be classified as weak hydrogen bonds.A set of 12 interaction classes were defined based on the division of the donors into three groups and the acceptors into four groups. These classes were examined separately, and the respective interactions described in detail in each class. Most prominent were interactions between aliphatic C-H donors and aromatic pi-acceptors and interactions between aromatic C-H donors and aromatic pi-acceptors. About three-quarters of the Trp-rings, half of all Phe and Tyr-rings and a quarter of all His-rings were found to be involved as acceptors in C-H...pi-interactions. On the donor side, a preference for aromatic C-H groups was observed, but also for the aliphatic side-chains of the long, extended amino acid residues Lys, Arg and Met, and the Pro ring. The average distance between the C-donor and the center-of-mass of the pi-acceptor was observed to be significantly longer in the 174 protein structures determined at >2.5 A resolution. Also, the distribution is significantly wider. This resolution dependence suggests that the force fields commonly used for the refinement of protein structures may not be adequate. C-H...pi-interactions involving aromatic groups either as donor or as acceptor groups are found mostly in the interior of the protein. The more hydrophilic the participating groups are, the closer to the surface are the interactions located. About 40 % of all C-H...pi-interactions occur between amino acid residue side-chains that are separated by nine or less residues in sequence. Dependent on the interaction class, different preferences for secondary structure, residue type and side-chain conformation were observed. It is likely that the C-H...pi-interactions contribute significantly to the overall stability of a protein. Copyright 2001 Academic Press.

This research was financially supported by National Key Basic Research Program of China (No. 2013CB933900) and National Natural Science Foundation of China (No. 31000326 & No. 31070057). The funders had no role in study design, data collection and analysis, decision to publish, or preparation of the manuscript.