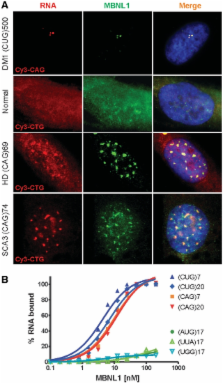 Mutant transcripts containing expanded CUG repeats in the untranslated region are a pathogenic factor in myotonic dystrophy type 1 (DM1). The mutant RNA sequesters the muscleblind-like 1 (MBNL1) splicing factor and causes misregulation of the alternative splicing of multiple genes that are linked to clinical symptoms of the disease. In this study, we show that either long untranslated CAG repeat RNA or short synthetic CAG repeats induce splicing aberrations typical of DM1. Alternative splicing defects are also caused by translated CAG repeats in normal cells transfected with a mutant ATXN3 gene construct and in cells derived from spinocerebellar ataxia type 3 and Huntington's disease patients. Splicing misregulation is unlikely to be caused by traces of antisense transcripts with CUG repeats, and the possible trigger of this misregulation may be sequestration of the MBNL1 protein with nuclear RNA inclusions containing expanded CAG repeat transcripts. We propose that alternative splicing misregulation by mutant CAG repeats may contribute to the pathological features of polyglutamine disorders.

J P Schouten (2002)
We describe a new method for relative quantification of 40 different DNA sequences in an easy to perform reaction requiring only 20 ng of human DNA. Applications shown of this multiplex ligation-dependent probe amplification (MLPA) technique include the detection of exon deletions and duplications in the human BRCA1, MSH2 and MLH1 genes, detection of trisomies such as Down's syndrome, characterisation of chromosomal aberrations in cell lines and tumour samples and SNP/mutation detection. Relative quantification of mRNAs by MLPA will be described elsewhere. In MLPA, not sample nucleic acids but probes added to the samples are amplified and quantified. Amplification of probes by PCR depends on the presence of probe target sequences in the sample. Each probe consists of two oligonucleotides, one synthetic and one M13 derived, that hybridise to adjacent sites of the target sequence. Such hybridised probe oligonucleotides are ligated, permitting subsequent amplification. All ligated probes have identical end sequences, permitting simultaneous PCR amplification using only one primer pair. Each probe gives rise to an amplification product of unique size between 130 and 480 bp. Probe target sequences are small (50-70 nt). The prerequisite of a ligation reaction provides the opportunity to discriminate single nucleotide differences.

Formation of neuronal intranuclear inclusions underlies the neurological dysfunction in mice transgenic for the HD mutation.

Stephen W. Davies,  Mark Turmaine,  Barbara A Cozens … (1997)
Huntington's disease (HD) is one of an increasing number of human neurodegenerative disorders caused by a CAG/polyglutamine-repeat expansion. The mutation occurs in a gene of unknown function that is expressed in a wide range of tissues. The molecular mechanism responsible for the delayed onset, selective pattern of neuropathology, and cell death observed in HD has not been described. We have observed that mice transgenic for exon 1 of the human HD gene carrying (CAG)115 to (CAG)156 repeat expansions develop pronounced neuronal intranuclear inclusions, containing the proteins huntingtin and ubiquitin, prior to developing a neurological phenotype. The appearance in transgenic mice of these inclusions, followed by characteristic morphological change within neuronal nuclei, is strikingly similar to nuclear abnormalities observed in biopsy material from HD patients.