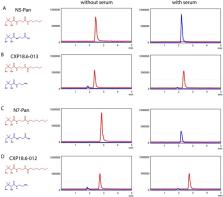 Journal: The Journal of Antibiotics

The emergence of multidrug resistant bacteria has prioritized the development of new antibiotics. N-substituted pantothenamides, analogs of the natural compound pantetheine, were reported to target bacterial coenzyme A biosynthesis, but these compounds have never reached the clinic due to their instability in biological fluids. Plasma-stable pantothenamide analogs could overcome these issues. We first synthesized a number of bioisosteres of the prototypic pantothenamide N7-Pan. A compound with an inverted amide bond (CXP18.6-012) was found to provide plasma-stability with minimal loss of activity compared to the parent compound N7-Pan. Next, we synthesized inverted pantothenamides with a large variety of side chains. Among these we identified a number of novel stable inverted pantothenamides with selective activity against Gram-positive bacteria such as staphylococci and streptococci, at low micromolar concentrations. These data provide future direction for the development of pantothenamides with clinical potential.

Serial cultivation of strains of human epidermal keratinocytes: the formation of keratinizing colonies from single cells.

Nicola H. Green,  J. Rheinwald (1975)
Human diploid epidermis epidermal cells have been successfully grown in serial culture. To initiate colony formation, they require the presence of fibroblasts, but proliferation of fibroblasts must be controlled so that the epidermal cell population is not overgrown. Both conditions can be achieved by the use of lethally irradiated 3T3 cells at the correct density. When trypsinized human skin cells are plated together with the 3T3 cells, the growth of the human fibroblasts is largely suppressed, but epidermal cells grow from single cells into colonies. Each colony consists of keratinocytes ultimately forming a stratified squamous epithelium in which the dividing cells are confined to the lowest layer(s). Hydrocortisone is added to the medium, since in secondary and subsequent subcultures it makes the colony morphology more oderly and distinctive, and maintains proliferation at a slightly greater rate. Under these culture conditions, it is possible to isolate keratinocyte clones free of viable fibroblasts. Like human diploid fibroblasts, human diploid keratinocytes appear to have a finite culture lifetime. For 7 strains studied, the culture lifetime ranged from 20-50 cell generations. The plating efficiency of the epidermal cells taken directly from skin was usually 0.1-1.0%. On subsequent transfer of the cultures initiated from newborns, the plating efficiency rose to 10% or higher, but was most often in the range of 1-5% and dropped sharply toward the end of their culture life. The plating efficiency and culture lifetime were lower for keratinocytes of older persons.

Carl White,  Charles O Rock,  Ning Zhang (2006)
The type II fatty acid synthase consists of a series of individual enzymes, each encoded by a separate gene, that catalyze discrete steps in chain elongation. The formation of fatty acids is vital to bacteria, and each of the essential enzymes and their acyl group carriers represent a potential target for the development of novel antibacterial therapeutics. High resolution x-ray and/or NMR structures of representative members of every enzyme in the type II pathway are now available, and these structures are a valuable resource to guide antibacterial drug discovery. The role of each enzyme in regulating pathway activity and the diversity in the components of the pathway in the major human pathogens are important considerations in deciding the most suitable targets for future drug development.