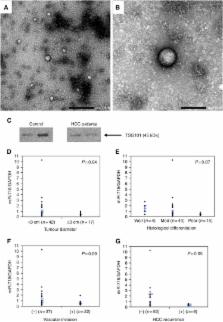 Predictive biomarkers for the recurrence of hepatocellular carcinoma (HCC) have great benefit in the selection of treatment options, including liver transplantation (LT), for HCC. The purpose of this study was to identify specific microRNAs (miRs) in exosomes from the serum of patients with recurrent HCC and to validate these molecules as novel biomarkers for HCC recurrence.

We employed microarray-based expression profiling of miRs derived from exosomes in the serum of HCC patients to identify a biomarker that distinguishes between patients with and without HCC recurrence after LT. This was followed by the validation in a separate cohort of 59 HCC patients who underwent living related LT. The functions and potential gene targets of the recurrence-specific miRs were analysed using a database, clinical samples and HCC cell lines.

We found that miR-718 showed significantly different expression in the serum exosomes of HCC cases with recurrence after LT compared with those without recurrence. Decreased expression of miR-718 was associated with HCC tumour aggressiveness in the validated cohort series. We identified HOXB8 as a potential target gene of miR-718, and its upregulation was associated with poor prognosis.

The Hox genes and their roles in oncogenesis.

Nilay Shah,  Saraswati Sukumar (2010)
Hox genes, a highly conserved subgroup of the homeobox superfamily, have crucial roles in development, regulating numerous processes including apoptosis, receptor signalling, differentiation, motility and angiogenesis. Aberrations in Hox gene expression have been reported in abnormal development and malignancy, indicating that altered expression of Hox genes could be important for both oncogenesis and tumour suppression, depending on context. Therefore, Hox gene expression could be important in diagnosis and therapy.

Anuradha Budhu,  Stephanie Roessler,  Zhao-You Tang … (2012)
Hepatocellular carcinoma (HCC) is an aggressive malignancy; its mechanisms of development and progression are poorly understood. We used an integrative approach to identify HCC driver genes, defined as genes whose copy numbers associate with gene expression and cancer progression. We combined data from high-resolution, array-based comparative genomic hybridization and transcriptome analysis of HCC samples from 76 patients with hepatitis B virus infection with data on patient survival times. Candidate genes were functionally validated using in vitro and in vivo models. Unsupervised analyses of array comparative genomic hybridization data associated loss of chromosome 8p with poor outcome (reduced survival time); somatic copy number alterations correlated with expression of 27.3% of genes analyzed. We associated expression levels of 10 of these genes with patient survival times in 2 independent cohorts (comprising 319 cases of HCC with mixed etiology) and 3 breast cancer cohorts (637 cases). Among the 10-gene signature, a cluster of 6 genes on 8p, (DLC1, CCDC25, ELP3, PROSC, SH2D4A, and SORBS3) were deleted in HCCs from patients with poor outcomes. In vitro and in vivo analyses indicated that the products of PROSC, SH2D4A, and SORBS3 have tumor-suppressive activities, along with the known tumor suppressor gene DLC1. We used an unbiased approach to identify 10 genes associated with HCC progression. These might be used in assisting diagnosis and to stage tumors based on gene expression patterns. Copyright © 2012 AGA Institute. Published by Elsevier Inc. All rights reserved.

Josep Llovet (2005)
Hepatocellular carcinoma (HCC) is the fifth most common cancer worldwide, and its incidence will further increase, to reach a plateau in 2015-2020. The natural history of the disease is quite well known, except for its early stages, because the majority of patients at this stage are treated with radical approaches. Staging systems are key to predict the prognostics of patients with cancer, to stratify the patients according to prognostic variables in the setting of clinical trials, and to guide the therapeutic approach. The current knowledge of the disease, however, is not sufficient for recommending a staging system to be used worldwide. The conventional staging systems-Okuda stage, and TNM stage-have shown important limitations for classifying patients. Several new systems have been recently proposed, but only three of them have been validated. The Barcelona Clinic Liver Cancer (BCLC) staging classification links the stage of the disease to a specific treatment strategy. The Japan Integrated Staging (JIS) score has been proposed and used in Japan, although it needs Western validation. The Cancer of the Liver Italian Program (CLIP) score is mainly proposed for patients with advanced tumors. Early detection of HCC through surveillance programs allows the application of potentially curative therapies, such as resection, liver transplantation, and percutaneous ablation in patients with early tumors. The applicability of these treatments varies according to geographical distribution: from 50% to 70% of cases in Japan; 25% to 40% of cases in Europe and the United States; and fewer than 10% in Africa. There are no randomized controlled trials (RCTs) comparing any of the three major therapies. These studies are not feasible in the West. Therefore, there is no firm evidence to establish the optimal first-line treatment for small single HCC in patients with well-preserved liver function. Resection and transplantation achieve the best outcomes in well-selected candidates (5-year survival of 60%-70%), and compete as the first option from an intention-to-treat perspective. If surgery is precluded, local, nonsurgical therapies are applied. Percutaneous treatments provide good results (5-year survival of 40%-50%), but are unable to achieve response rates and outcomes comparable to those for surgical treatments, even when applied as the first option. Radiofrequency thermal ablation provides slightly better objective response rates than ethanol injection, but no survival advantages have been fully demonstrated. The remaining treatments have been assessed in the setting of around 70 RCTs conducted during the past 25 years. Chemoembolization has been shown to provide modest survival advantages in two RCTs and a metaanalysis, and is currently the mainstay of treatment in 10% of the whole HCC population. The ideal candidates for this option are patients with well-preserved liver function (Child-Pugh class A) and multinodular asymptomatic tumors without vascular invasion. Further RCTs are needed to assess the best chemotherapeutic agent and the ideal re-treatment schedule. There is no firstline option for patients with advanced HCC (vascular invasion, extrahepatic spread, or cancer-related symptoms). Systemic doxorubicin provides partial responses in 10% of cases, without proven survival advantages, and well-known treatment-related complications. Several other treatments, such as immunotherapy, internal radiation, tamoxifen, or anti-androgen agents, have not shown any relevant anti-tumoral effect or survival benefit. New drugs, such as tyrosine kinase inhibitors and anti-angiogenic agents, are currently being tested in the setting of clinical trials.

From twelve months after its original publication, this work is licensed under the Creative Commons Attribution-NonCommercial-Share Alike 3.0 Unported License. To view a copy of this license, visit http://creativecommons.org/licenses/by-nc-sa/3.0/