Analysis of Outdoor Thermal Discomfort Over the Kingdom of Saudi Arabia 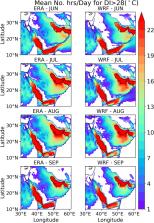 In this study, the variability and trends of the outdoor thermal discomfort index (DI) in the Kingdom of Saudi Arabia (KSA) were analyzed over the 39‐year period of 1980–2018. The hourly DI was estimated based on air temperature and relative humidity data obtained from the next‐generation global reanalysis from the European Center for Medium‐Range Weather Forecasts and in‐house high‐resolution regional reanalysis generated using an assimilative Weather Research Forecast (WRF) model. The DI exceeds 28°C, that is, the threshold for human discomfort, in all summer months (June to September) over most parts of the KSA due to a combination of consistently high temperatures and relative humidity. The DI is greater than 28°C for 8–16 h over the western parts of KSA and north of the central Red Sea. A DI of >28°C persistes for 7–9 h over the Red Sea and western KSA for 90% of summer days. The spatial extent and number of days with DI > 30°C, that is, the threshold for severe human discomfort, are significantly lower than those with DI > 28°C. Long‐term trends in the number of days with DI > 28°C indicate a reduced rate of increase or even a decrease over some parts of the southwestern KSA in recent decades (1999–2018). Areas with DI > 30°C, in particular the northwestern regions of the Arabian Gulf and its adjoining regions, also showed improved comfort levels during recent decades. Significant increases in population and urbanization have been reported throughout the KSA during the study period. Analysis of five‐years clinical data suggests a positive correlation between higher temperatures and humidity with heat‐related deaths during the Hajj pilgrimage. The information provided herein is expected to aid national authorities and policymakers in developing necessary strategies to mitigate the exposure of humans to high levels of thermal discomfort in the KSA.

The physiological equivalent temperature - a universal index for the biometeorological assessment of the thermal environment.

P Hoppe (1999)
With considerably increased coverage of weather information in the news media in recent years in many countries, there is also more demand for data that are applicable and useful for everyday life. Both the perception of the thermal component of weather as well as the appropriate clothing for thermal comfort result from the integral effects of all meteorological parameters relevant for heat exchange between the body and its environment. Regulatory physiological processes can affect the relative importance of meteorological parameters, e.g. wind velocity becomes more important when the body is sweating. In order to take into account all these factors, it is necessary to use a heat-balance model of the human body. The physiological equivalent temperature (PET) is based on the Munich Energy-balance Model for Individuals (MEMI), which models the thermal conditions of the human body in a physiologically relevant way. PET is defined as the air temperature at which, in a typical indoor setting (without wind and solar radiation), the heat budget of the human body is balanced with the same core and skin temperature as under the complex outdoor conditions to be assessed. This way PET enables a layperson to compare the integral effects of complex thermal conditions outside with his or her own experience indoors. On hot summer days, for example, with direct solar irradiation the PET value may be more than 20 K higher than the air temperature, on a windy day in winter up to 15 K lower.

Bin-Bin Wang,  Jian Liu,  Hyung-Jin Kim … (2013)
Prediction of monsoon changes in the coming decades is important for infrastructure planning and sustainable economic development. The decadal prediction involves both natural decadal variability and anthropogenic forcing. Hitherto, the causes of the decadal variability of Northern Hemisphere summer monsoon (NHSM) are largely unknown because the monsoons over Asia, West Africa, and North America have been studied primarily on a regional basis, which is unable to identify coherent decadal changes and the overriding controls on planetary scales. Here, we show that, during the recent global warming of about 0.4 °C since the late 1970s, a coherent decadal change of precipitation and circulation emerges in the entirety of the NHSM system. Surprisingly, the NHSM as well as the Hadley and Walker circulations have all shown substantial intensification, with a striking increase of NHSM rainfall by 9.5% per degree of global warming. This is unexpected from recent theoretical prediction and model projections of the 21st century. The intensification is primarily attributed to a mega-El Niño/Southern Oscillation (a leading mode of interannual-to-interdecadal variation of global sea surface temperature) and the Atlantic Multidecadal Oscillation, and further influenced by hemispherical asymmetric global warming. These factors driving the present changes of the NHSM system are instrumental for understanding and predicting future decadal changes and determining the proportions of climate change that are attributable to anthropogenic effects and long-term internal variability in the complex climate system.