Phylogenetical coherence of Pseudomonas in unexplored soils of Himalayan region 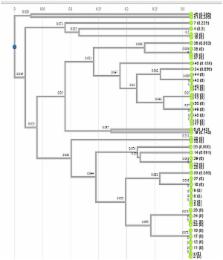 Pseudomonas, an enormously diverse genus of the γ- Proteobacteria, is an important member of soil microbial communities. In this study, genetic heterogeneity and plant growth promotory property of Pseudomonas was compared within the group Pseudomonas sensu stricto isolated from the lesser explored niches of Himalayan region. A significant difference ( P < 0.001 in total Pseudomonas count) was observed among the six types of soil samples collected from oak forest, fine forest, and agricultural soil. The highest numbers of bacteria were isolated from oak forest soil followed by pine forest soil and agricultural soil. 23.52 % of the total 238 isolates were siderophore producers and were identified as Pseudomonas on the basis of PCR amplification using 16S rDNA Pseudomonas specific primer. The molecular analysis by Jaccard’s similarity coefficient resulted into eight different clusters and six outlying branches. Some of the clusters include Pseudomonas from forest as well as agricultural land. Among the 51 isolates 100 % were siderophore and IAA producers, 68.62 % were phosphate solubilizers and 62.74 % HCN producers. The results reveal that isolates from lesser explored area possess beneficial properties and show genetic heterogeneity among them.

Universal chemical assay for the detection and determination of siderophores.

J Neilands,  B Schwyn,  Torsten Neilands (1986)
A universal method to detect and determine siderophores was developed by using their high affinity for iron(III). The ternary complex chrome azurol S/iron(III)/hexadecyltrimethylammonium bromide, with an extinction coefficient of approximately 100,000 M-1 cm-1 at 630 nm, serves as an indicator. When a strong chelator removes the iron from the dye, its color turns from blue to orange. Because of the high sensitivity, determination of siderophores in solution and their characterization by paper electrophoresis chromatography can be performed directly on supernatants of culture fluids. The method is also applicable to agar plates. Orange halos around the colonies on blue agar are indicative of siderophore excretion. It was demonstrated with Escherichia coli strains that biosynthetic, transport, and regulatory mutations in the enterobactin system are clearly distinguishable. The method was successfully used to screen mutants in the iron uptake system of two Rhizobium meliloti strains, DM5 and 1021.

Two simple media for the demonstration of pyocyanin and fluorescin.

LPSN—list of prokaryotic names with standing in nomenclature

Aidan C. Parte (2013)
The List of Prokaryotic Names with Standing in Nomenclature (LPSN; http://www.bacterio.net) is a database that lists the names of prokaryotes (Bacteria and Archaea) that have been validly published in the International Journal of Systematic and Evolutionary Microbiology directly or by inclusion in a Validation List, under the Rules of International Code of Nomenclature of Bacteria. Currently there are 15 974 taxa listed. In addition, LPSN has an up-to-date classification of prokaryotes and information on prokaryotic nomenclature and culture collections.