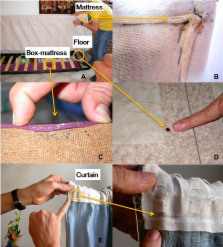 Bedbugs (Cimex lectularius or Cimex hemipterus) are cosmopolite hematophagus insects, and recent outbreaks have been reported in all major occidental countries. Although they are suspected of transmitting more than 40 infectious agents, no report has yet definitively demonstrated that capacity.

Bedbugs are brown and flat hematophagous insects. The 2 cosmopolite species, Cimex lectularius and Cimex hemipterus, feed on humans and/or domestic animals, and recent outbreaks have been reported in occidental countries. Site assessment for bedbug eradication is complex but can be assured, despite emerging insecticide resistance, by hiring a pest-control manager. The common dermatological presentation of bites is an itchy maculopapular wheal. Urticarial reactions and anaphylaxis can also occur. Bedbugs are suspected of transmitting infectious agents, but no report has yet demonstrated that they are infectious disease vectors. We describe 45 candidate pathogens potentially transmitted by bedbugs, according to their vectorial capacity, in the wild, and vectorial competence, in the laboratory. Because of increasing demands for information about effective control tactics and public health risks of bedbugs, continued research is needed to identify new pathogens in wild Cimex species (spp) and insecticide resistance.

Wolbachia as a bacteriocyte-associated nutritional mutualist.

Takahiro Hosokawa,  Ryuichi Koga,  Yoshitomo Kikuchi … (2010)
Many insects are dependent on bacterial symbionts that provide essential nutrients (ex. aphid-Buchnera and tsetse-Wiglesworthia associations), wherein the symbionts are harbored in specific cells called bacteriocytes that constitute a symbiotic organ bacteriome. Facultative and parasitic bacterial symbionts like Wolbachia have been regarded as evolutionarily distinct from such obligate nutritional mutualists. However, we discovered that, in the bedbug Cimex lectularius, Wolbachia resides in a bacteriome and appears to be an obligate nutritional mutualist. Two bacterial symbionts, a Wolbachia strain and an unnamed gamma-proteobacterium, were identified from different strains of the bedbug. The Wolbachia symbiont was detected from all of the insects examined whereas the gamma-proteobacterium was found in a part of them. The Wolbachia symbiont was specifically localized in the bacteriomes and vertically transmitted via the somatic stem cell niche of germalia to oocytes, infecting the incipient symbiotic organ at an early stage of the embryogenesis. Elimination of the Wolbachia symbiont resulted in retarded growth and sterility of the host insect. These deficiencies were rescued by oral supplementation of B vitamins, confirming the essential nutritional role of the symbiont for the host. The estimated genome size of the Wolbachia symbiont was around 1.3 Mb, which was almost equivalent to the genome sizes of parasitic Wolbachia strains of other insects. These results indicate that bacteriocyte-associated nutritional mutualism can evolve from facultative and prevalent microbial associates like Wolbachia, highlighting a previously unknown aspect of the parasitism-mutualism evolutionary continuum.

D Raoult,  T Marrie,  J-L Mege (2005)
Q fever is a zoonosis caused by Coxiella burnetii. Infection with C burnetii can be acute or chronic, and exhibits a wide spectrum of clinical manifestations. The extreme infectivity of the bacterium results in large outbreaks and makes it a potential bioweapon. In the past decade, the complete genome sequencing of C burnetii, the exploration of bacterial interactions with the host, and the description of the natural history of the disease in human beings and in experimental models have all added to our knowledge about this fascinating disease. Advances in understanding the pathophysiology and natural history of Q fever are reviewed.

Biology of the bed bugs (Cimicidae).

Klaus Reinhardt,  Michael Siva-Jothy (2006)
The cimicids, or bed bugs, belong to a highly specialized hematophagous taxon that parasitizes primarily humans, birds, and bats. Their best-known member is the bed bug, Cimex lectularius. This group demonstrates some bizarre but evolutionarily important biology. All members of the family Cimicidae show traumatic insemination and a suite of female adaptations to this male trait. Cimicids therefore constitute an ideal model system for examining the extreme causes and consequences of sexual selection. Our dual goal in re-examining the extensive literature on this group is to identify issues relevant to pest control, such as dispersal ecology and the recent global spread, and to understand the selective forces that have shaped the unique aspects of this insect's biology.