Management of patients with multidrug-resistant/extensively drug-resistant tuberculosis in Europe: a TBNET consensus statement 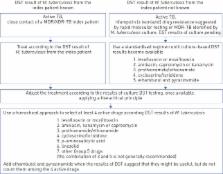 The emergence of multidrug-resistant (MDR) and extensively drug-resistant (XDR) tuberculosis (TB) substantially challenges TB control, especially in the European Region of the World Health Organization, where the highest prevalence of MDR/XDR cases is reported. The current management of patients with MDR/XDR-TB is extremely complex for medical, social and public health systems. The treatment with currently available anti-TB therapies to achieve relapse-free cure is long and undermined by a high frequency of adverse drug events, suboptimal treatment adherence, high costs and low treatment success rates. Availability of optimal management for patients with MDR/XDR-TB is limited even in the European Region. In the absence of a preventive vaccine, more effective diagnostic tools and novel therapeutic interventions the control of MDR/XDR-TB will be extremely difficult. Despite recent scientific advances in MDR/XDR-TB care, decisions for the management of patients with MDR/XDR-TB and their contacts often rely on expert opinions, rather than on clinical evidence.

This document summarises the current knowledge on the prevention, diagnosis and treatment of adults and children with MDR/XDR-TB and their contacts, and provides expert consensus recommendations on questions where scientific evidence is still lacking.

TBNET consensus statement on the management of patients with MDR/XDR-TB has been released in the Eur Respir J http://ow.ly/uizRD

Neel Gandhi,  Paul Nunn,  Keertan Dheda … (2010)
Although progress has been made to reduce global incidence of drug-susceptible tuberculosis, the emergence of multidrug-resistant (MDR) and extensively drug-resistant (XDR) tuberculosis during the past decade threatens to undermine these advances. However, countries are responding far too slowly. Of the estimated 440,000 cases of MDR tuberculosis that occurred in 2008, only 7% were identified and reported to WHO. Of these cases, only a fifth were treated according to WHO standards. Although treatment of MDR and XDR tuberculosis is possible with currently available diagnostic techniques and drugs, the treatment course is substantially more costly and laborious than for drug-susceptible tuberculosis, with higher rates of treatment failure and mortality. Nonetheless, a few countries provide examples of how existing technologies can be used to reverse the epidemic of MDR tuberculosis within a decade. Major improvements in laboratory capacity, infection control, performance of tuberculosis control programmes, and treatment regimens for both drug-susceptible and drug-resistant disease will be needed, together with a massive scale-up in diagnosis and treatment of MDR and XDR tuberculosis to prevent drug-resistant strains from becoming the dominant form of tuberculosis. New diagnostic tests and drugs are likely to become available during the next few years and should accelerate control of MDR and XDR tuberculosis. Equally important, especially in the highest-burden countries of India, China, and Russia, will be a commitment to tuberculosis control including improvements in national policies and health systems that remove financial barriers to treatment, encourage rational drug use, and create the infrastructure necessary to manage MDR tuberculosis on a national scale. Copyright 2010 Elsevier Ltd. All rights reserved.

For the authors’ affiliations see the Acknowledgements section

ERJ Open articles are open access and distributed under the terms of the Creative Commons Attribution Non-Commercial Licence 4.0.