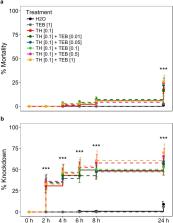 Agricultural practices often involve tank-mixing and co-application of insecticides with fungicides to control crop pests. However, natural methods relying on biological control agents such as hymenopteran parasitoids have been shown to be highly effective in suppressing crop pest populations. The current body of insecticide risk assessment data accounting for fungicide co-application is very small, the present study being the first to examine this in a parasitoid wasp. Through low-dose exposure to dry residues of the neonicotinoid insecticide thiacloprid, we examined its mortal and knockdown effect on Aphelinus abdominalis when co-applied with increasing doses of the fungicide tebuconazole. Both of these acute effects of thiacloprid were synergised (toxicity increased to a greater-than-additive effect) by tebuconazole, resulting in significant mortality from low-dose co-applications of tebuconazole, and significant knockdown even without co-applied tebuconazole, the effect increasing as tebuconazole concentration increased. We show the highly toxic effect that a low dose of thiacloprid imposes on A. abdominalis populations, and a synergistic toxicity when co-applied with low doses of tebuconazole. Our work suggests a need for updating pesticide risk assessment methods, accounting for pesticide mixtures, in order to make these risk assessments more field relevant.

Four Common Pesticides, Their Mixtures and a Formulation Solvent in the Hive Environment Have High Oral Toxicity to Honey Bee Larvae

Wanyi Zhu,  Daniel Schmehl,  Christopher A. Mullin … (2014)
Recently, the widespread distribution of pesticides detected in the hive has raised serious concerns about pesticide exposure on honey bee (Apis mellifera L.) health. A larval rearing method was adapted to assess the chronic oral toxicity to honey bee larvae of the four most common pesticides detected in pollen and wax - fluvalinate, coumaphos, chlorothalonil, and chloropyrifos - tested alone and in all combinations. All pesticides at hive-residue levels triggered a significant increase in larval mortality compared to untreated larvae by over two fold, with a strong increase after 3 days of exposure. Among these four pesticides, honey bee larvae were most sensitive to chlorothalonil compared to adults. Synergistic toxicity was observed in the binary mixture of chlorothalonil with fluvalinate at the concentrations of 34 mg/L and 3 mg/L, respectively; whereas, when diluted by 10 fold, the interaction switched to antagonism. Chlorothalonil at 34 mg/L was also found to synergize the miticide coumaphos at 8 mg/L. The addition of coumaphos significantly reduced the toxicity of the fluvalinate and chlorothalonil mixture, the only significant non-additive effect in all tested ternary mixtures. We also tested the common ‘inert’ ingredient N-methyl-2-pyrrolidone at seven concentrations, and documented its high toxicity to larval bees. We have shown that chronic dietary exposure to a fungicide, pesticide mixtures, and a formulation solvent have the potential to impact honey bee populations, and warrants further investigation. We suggest that pesticide mixtures in pollen be evaluated by adding their toxicities together, until complete data on interactions can be accumulated.

Do Biopesticides Affect the Demographic Traits of a Parasitoid Wasp and Its Biocontrol Services through Sublethal Effects?

Antonio Biondi,  Lucia Zappalà,  John D. Stark … (2013)
Pesticide risk assessments are usually based on short-term acute toxicity tests, while longer-term population dynamic related traits, critical to the success of biological control and Integrated Pest Management (IPM) programs, are often overlooked. This is increasingly important with respect to new biopesticides that frequently cause no short-term acute effects, but that can induce multiple physiological and behavioral sublethal effects, leading to a decrease in population growth and ecosystem services. In this study we assessed the lethal and sublethal effects of six biopesticides [abamectin, azadirachtin, Bacillus thuringiensis, borax plus citrus oil (Prev-Am®), emamectin benzoate, and spinosad], used in tomato crops to control the invasive pest Tuta absoluta (Lepidoptera: Gelechiidae), on adults and pupae of the parasitoid Bracon nigricans (Hymenoptera: Braconidae). Data on female survival and production of female offspring were used to calculate population growth indexes as a measure of population recovery after pesticide exposure. Spinosad caused 100% and 80% mortality in exposed adults (even 10 d after the treatment) and pupae, respectively. Although most of the biopesticides had low levels of acute toxicity, multiple sublethal effects were observed. The biocontrol activity of both females that survived 1-h and 10-d old residues, and females that emerged from topically treated pupae was significantly affected by the application of the neurotoxic insecticides emamectin benzoate and abamectin. Furthermore, very low B. nigricans demographic growth indices were estimated for these two insecticides, indicating potential local extinction of the wasp populations. Among the tested products, Bt proved to be the safest for B. nigricans adults and pupae. Our findings emphasize that acute toxicity assessment alone cannot fully predict the actual impact of pesticides on non-target parasitoids. Thus, sublethal effects related to the species specific life-history variables must be carefully considered in order to assess pesticide risks and to incorporate new pesticides, including biopesticides, into IPM programmes.

Species richness and parasitism in a fragmented landscape: experiments and field studies with insects on Vicia sepium

This study was partially funded by European ERA-NET C-IPM project no 33: IPM4Meligethes, the Institutional Research Funding project no IUT36-2 of Estonian Research Council, and Research Foundation-Flanders (FWO-Vlaanderen). JW received a PhD grant from European Social Fund Doctoral Students, as well as the Internalisation Programme DoRa (carried out by Archimedes Foundation). The funders had no role in study design, data collection and analysis, decision to publish, or preparation of the manuscript. There was no additional external funding received for this study.

Data Availability All relevant data are within the manuscript and its Supporting Information files.
Data availability:
ScienceOpen disciplines: Uncategorized