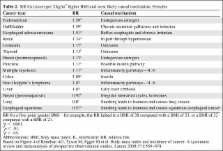 The article examines the importance of managing weight to reduce risk for developing cancer and for survival among cancer patients and presents a set of strategies that can be useful to guide clinical advice to patients for whom weight control is an important adjunct to risk management or to improve quality of life and disease-free survival after diagnosis.

Weight, weight gain, and obesity account for approximately 20% of all cancer cases. Evidence on the relation of each to cancer is summarized, including esophageal, thyroid, colon, renal, liver, melanoma, multiple myeloma, rectum, gallbladder, leukemia, lymphoma, and prostate in men; and postmenopausal breast and endometrium in women. Different mechanisms drive etiologic pathways for these cancers. Weight loss, particularly among postmenopausal women, reduces risk for breast cancer. Among cancer patients, data are less robust, but we note a long history of poor outcomes after breast cancer among obese women. While evidence on obesity and outcomes for other cancers is mixed, growing evidence points to benefits of physical activity for breast and colon cancers. Dosing of chemotherapy and radiation therapy among obese patients is discussed and the impact on therapy-related toxicity is noted. Guidelines for counseling patients for weight loss and increased physical activity are presented and supported by strong evidence that increased physical activity leads to improved quality of life among cancer survivors. The “Five A's” model guides clinicians through a counseling session: assess, advise, agree, assist, arrange. The burden of obesity on society continues to increase and warrants closer attention by clinicians for both cancer prevention and improved outcomes after diagnosis.

T J Key, P N Appleby, G K Reeves … (2003)
Obesity is associated with increased breast cancer risk among postmenopausal women. We examined whether this association could be explained by the relationship of body mass index (BMI) with serum sex hormone concentrations. We analyzed individual data from eight prospective studies of postmenopausal women. Data on BMI and prediagnostic estradiol levels were available for 624 case subjects and 1669 control subjects; data on the other sex hormones were available for fewer subjects. The relative risks (RRs) with 95% confidence intervals (CIs) of breast cancer associated with increasing BMI were estimated by conditional logistic regression on case-control sets, matched within each study for age and recruitment date, and adjusted for parity. All statistical tests were two-sided. Breast cancer risk increased with increasing BMI (P(trend) =.002), and this increase in RR was substantially reduced by adjustment for serum estrogen concentrations. Adjusting for free estradiol reduced the RR for breast cancer associated with a 5 kg/m2 increase in BMI from 1.19 (95% CI = 1.05 to 1.34) to 1.02 (95% CI = 0.89 to 1.17). The increased risk was also substantially reduced after adjusting for other estrogens (total estradiol, non-sex hormone-binding globulin-bound estradiol, estrone, and estrone sulfate), and moderately reduced after adjusting for sex hormone-binding globulin, whereas adjustment for the androgens (androstenedione, dehydroepiandrosterone, dehydroepiandrosterone sulfate, and testosterone) had little effect on the excess risk. The results are compatible with the hypothesis that the increase in breast cancer risk with increasing BMI among postmenopausal women is largely the result of the associated increase in estrogens, particularly bioavailable estradiol.

David Carling (2004)
AMP-activated protein kinase (AMPK) is the downstream component of a protein kinase cascade that acts as an intracellular energy sensor maintaining the energy balance within the cell. This pivotal role of AMPK places it in an ideal position for regulating whole-body energy metabolism, and AMPK might play a part in protecting the body from metabolic diseases such as type 2 diabetes and obesity. Mutations in AMPK cause cardiac hypertrophy and arrhythmia. Recent findings have identified LKB1--a protein kinase that is mutated in a hereditary form of cancer--as a candidate for the upstream kinase in the AMPK cascade. AMPK could provide a link in human diseases of which the underlying cause is due to defects in energy metabolism.

Pamela J Goodwin, Marguerite Ennis, Kathleen Pritchard … (2002)
Insulin, a member of a family of growth factors that includes insulin-like growth factor (IGF)-I and IGF-II, exerts mitogenic effects on normal and malignant breast epithelial cells, acting via insulin and IGF-I receptors. Because of this and because of its recognized association with obesity, an adverse prognostic factor in breast cancer, we examined the prognostic associations of insulin in early-stage breast cancer. A cohort of 512 women without known diabetes, who had early-stage (T1 to T3, N0 to N1, and M0) breast cancer, was assembled and observed prospectively. Information on traditional prognostic factors and body size was collected, and fasting blood was obtained. Fasting insulin was associated with distant recurrence and death; the hazard ratios and 95% confidence intervals (CI) for those in the highest (> 51.9 pmol/L) versus the lowest (< 27.0 pmol/L) insulin quartile were 2.0 (95% CI, 1.2 to 3.3) and 3.1 (95% CI, 1.7 to 5.7), respectively. There was some evidence to suggest that the association of insulin with breast cancer outcomes may be nonlinear. Insulin was correlated with body mass index (Spearman r = 0.59, P <.001), which, in turn, was associated with distant recurrence and death (P <.001). In multivariate analyses that included fasting insulin and available tumor- and treatment-related variables, adjusted hazard ratios for the upper versus lower insulin quartile were 2.1 (95% CI, 1.2 to 3.6) and 3.3 (95% CI, 1.5 to 7.0) for distant recurrence and death, respectively. Fasting insulin level is associated with outcome in women with early breast cancer. High levels of fasting insulin identify women with poor outcomes in whom more effective treatment strategies should be explored.

Disclosures: Kathleen Y. Wolin: None; Kenneth Carson: None; Graham A. Colditz: None.

available online without subscription through the open access option.