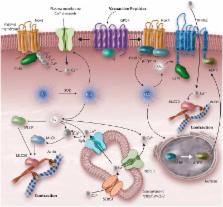 Parvathi Kumar,  Brian R. Wamhoff,  Gary Owens (2004)
The focus of this review is to provide an overview of the current state of knowledge of molecular mechanisms/processes that control differentiation of vascular smooth muscle cells (SMC) during normal development and maturation of the vasculature, as well as how these mechanisms/processes are altered in vascular injury or disease. A major challenge in understanding differentiation of the vascular SMC is that this cell can exhibit a wide range of different phenotypes at different stages of development, and even in adult organisms the cell is not terminally differentiated. Indeed, the SMC is capable of major changes in its phenotype in response to changes in local environmental cues including growth factors/inhibitors, mechanical influences, cell-cell and cell-matrix interactions, and various inflammatory mediators. There has been much progress in recent years to identify mechanisms that control expression of the repertoire of genes that are specific or selective for the vascular SMC and required for its differentiated function. One of the most exciting recent discoveries was the identification of the serum response factor (SRF) coactivator gene myocardin that appears to be required for expression of many SMC differentiation marker genes, and for initial differentiation of SMC during development. However, it is critical to recognize that overall control of SMC differentiation/maturation, and regulation of its responses to changing environmental cues, is extremely complex and involves the cooperative interaction of many factors and signaling pathways that are just beginning to be understood. There is also relatively recent evidence that circulating stem cell populations can give rise to smooth muscle-like cells in association with vascular injury and atherosclerotic lesion development, although the exact role and properties of these cells remain to be clearly elucidated. The goal of this review is to summarize the current state of our knowledge in this area and to attempt to identify some of the key unresolved challenges and questions that require further study.

Calcium sensitization of smooth muscle mediated by a Rho-associated protein kinase in hypertension.

T Ishizaki,  T Ono,  T Morishita … (1997)
Abnormal smooth-muscle contractility may be a major cause of disease states such as hypertension, and a smooth-muscle relaxant that modulates this process would be useful therapeutically. Smooth-muscle contraction is regulated by the cytosolic Ca2+ concentration and by the Ca2+ sensitivity of myofilaments: the former activates myosin light-chain kinase and the latter is achieved partly by inhibition of myosin phosphatase. The small GTPase Rho and its target, Rho-associated kinase, participate in this latter mechanism in vitro, but their participation has not been demonstrated in intact muscles. Here we show that a pyridine derivative, Y-27632, selectively inhibits smooth-muscle contraction by inhibiting Ca2+ sensitization. We identified the Y-27632 target as a Rho-associated protein kinase, p160ROCK. Y-27632 consistently suppresses Rho-induced, p160ROCK-mediated formation of stress fibres in cultured cells and dramatically corrects hypertension in several hypertensive rat models. Our findings indicate that p160ROCK-mediated Ca2+ sensitization is involved in the pathophysiology of hypertension and suggest that compounds that inhibit this process might be useful therapeutically.

K K Griendling,  C A Minieri,  J D Ollerenshaw … (1994)
The signaling pathways involved in the long-term metabolic effects of angiotensin II (Ang II) in vascular smooth muscle cells are incompletely understood but include the generation of molecules likely to affect oxidase activity. We examined the ability of Ang II to stimulate superoxide anion formation and investigated the identity of the oxidases responsible for its production. Treatment of vascular smooth muscle cells with Ang II for 4 to 6 hours caused a 2.7 +/- 0.4-fold increase in intracellular superoxide anion formation as detected by lucigenin assay. This superoxide appeared to result from activation of both the NADPH and NADH oxidases. NADPH oxidase activity increased from 3.23 +/- 0.61 to 11.80 +/- 1.72 nmol O2-/min per milligram protein after 4 hours of Ang II, whereas NADH oxidase activity increased from 16.76 +/- 2.13 to 45.00 +/- 4.57 nmol O2-/min per milligram protein. The NADPH oxidase activity was stimulated by exogenous phosphatidic and arachidonic acids and was partially inhibited by the specific inhibitor diphenylene iodinium. NADH oxidase activity was increased by arachidonic and linoleic acids, was insensitive to exogenous phosphatidic acid, and was inhibited by high concentrations of quinacrine. Both of these oxidases appear to reside in the plasma membrane, on the basis of migration of the activity after cellular fractionation and their apparent insensitivity to the mitochondrial poison KCN. These observations suggest that Ang II specifically activates enzyme systems that promote superoxide generation and raise the possibility that these pathways function as second messengers for long-term responses, such as hypertrophy or hyperplasia.

This article is part of the Spotlight Issue on Novel concepts for the role of smooth muscle cells in vascular disease.