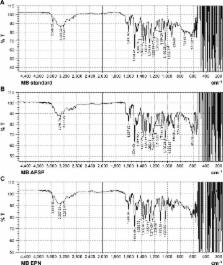 Berberine is an isoquinoline alkaloid widely used in Ayurveda and traditional Chinese medicine to treat illnesses such as hypertension and inflammatory conditions, and as an anticancer and hepato-protective agent. Berberine has low oral bioavailability due to poor aqueous solubility and insufficient dissolution rate, which can reduce the efficacy of drugs taken orally. In this study, evaporative precipitation of nanosuspension (EPN) and anti-solvent precipitation with a syringe pump (APSP) were used to address the problems of solubility, dissolution rate and bioavailability of berberine.

Semi-crystalline nanoparticles (NPs) of 90–110 nm diameter for APSP and 65–75 nm diameter for EPN were prepared and then characterized using differential scanning calorimetry (DSC) and X-ray powder diffractometry (XRD). Thereafter, drug content solubility and dissolution studies were undertaken. Berberine and its NPs were evaluated for their antibacterial activity.

The results indicate that the NPs have significantly increased solubility and dissolution rate due to conversion of the crystalline structure to a semi-crystalline form.

Berberine NPs produced by both APSP and EPN methods have shown promising activities against Gram-positive and Gram-negative bacteria, and yeasts, with NPs prepared through the EPN method showing superior results compared to those made with the APSP method and the unprocessed drug.

C Leuner (2000)
The solubility behaviour of drugs remains one of the most challenging aspects in formulation development. With the advent of combinatorial chemistry and high throughput screening, the number of poorly water soluble compounds has dramatically increased. Although solid solutions have tremendous potential for improving drug solubility, 40 years of research have resulted in only a few marketed products using this approach. With the introduction of new manufacturing technologies such as hot melt extrusion, it should be possible to overcome problems in scale-up and for this reason solid solutions are enjoying a renaissance. This article begins with an overview of the historical background and definitions of the various systems including eutectic mixtures, solid dispersions and solid solutions. The remainder of the article is devoted to the production, the different carriers and the methods used for the characterization of solid dispersions.

C Keck,  H. Müller (2005)
For many new chemical entities (NCE) of very low solubility oral bioavailability enhancement by micronisation is not sufficient, the next step taken was nanonisation. The production of drug nanocrystals by bottom up techniques (precipitation) is briefly described, main focus is given on particle diminution by high pressure homogenisation. Homogenisation can be performed in water (DissoCubes) or alternatively in non-aqueous media or water-reduced media (Nanopure). There is also a combination process of precipitation followed by a second high energy step, e.g. homogenisation (NANOEDGE). The result is a suspension of drug nanocrystals in a liquid, the so-called nanosuspension. Presented are the physical background of the diminution process, effects of production parameters (power density, number of homogenisation cycles) on crystal size, clinical batch production and scaling up of the production. As an important point the transfer of the liquid nanosuspensions to patient convenient oral dosage forms such as tablets and capsules is described.