Plasma cell survival in the absence of B cell memory 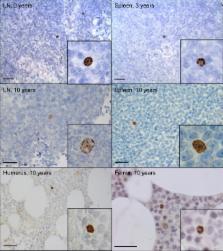 Pre-existing serum antibodies play an important role in vaccine-mediated protection against infection but the underlying mechanisms of immune memory are unclear. Clinical studies indicate that antigen-specific antibody responses can be maintained for many years, leading to theories that reactivation/differentiation of memory B cells into plasma cells is required to sustain long-term antibody production. Here, we present a decade-long study in which we demonstrate site-specific survival of bone marrow-derived plasma cells and durable antibody responses to multiple virus and vaccine antigens in rhesus macaques for years after sustained memory B cell depletion. Moreover, BrdU + cells with plasma cell morphology can be detected for 10 years after vaccination/BrdU administration, indicating that plasma cells may persist for a prolonged period of time in the absence of cell division. On the basis of these results, long-lived plasma cells represent a key cell population responsible for long-term antibody production and serological memory.

Impact of caloric restriction on health and survival in rhesus monkeys from the NIA study.

N Barnard,  Susan Young,  G A Handy … (2012)
Calorie restriction (CR), a reduction of 10–40% in intake of a nutritious diet, is often reported as the most robust non-genetic mechanism to extend lifespan and healthspan. CR is frequently used as a tool to understand mechanisms behind ageing and age-associated diseases. In addition to and independently of increasing lifespan, CR has been reported to delay or prevent the occurrence of many chronic diseases in a variety of animals. Beneficial effects of CR on outcomes such as immune function, motor coordination and resistance to sarcopenia in rhesus monkeys have recently been reported. We report here that a CR regimen implemented in young and older age rhesus monkeys at the National Institute on Aging (NIA) has not improved survival outcomes. Our findings contrast with an ongoing study at the Wisconsin National Primate Research Center (WNPRC), which reported improved survival associated with 30% CR initiated in adult rhesus monkeys (7–14 years) and a preliminary report with a small number of CR monkeys. Over the years, both NIA and WNPRC have extensively documented beneficial health effects of CR in these two apparently parallel studies. The implications of the WNPRC findings were important as they extended CR findings beyond the laboratory rodent and to a long-lived primate. Our study suggests a separation between health effects, morbidity and mortality, and similar to what has been shown in rodents, study design, husbandry and diet composition may strongly affect the life-prolonging effect of CR in a long-lived nonhuman primate.

Maintenance of serological memory by polyclonal activation of human memory B cells.

N L BERNASCONI,  Elisabetta Traggiai,  Antonio Lanzavecchia (2002)
Production of antibodies can last for a lifetime, through mechanisms that remain poorly understood. Here, we show that human memory B lymphocytes proliferate and differentiate into plasma cells in response to polyclonal stimuli, such as bystander T cell help and CpG DNA. Furthermore, plasma cells secreting antibodies to recall antigens are produced in vivo at levels proportional to the frequency of specific memory B cells, even several years after antigenic stimulation. Although antigen boosting leads to a transient increase in specific antibody levels, ongoing polyclonal activation of memory B cells offers a means to maintain serological memory for a human lifetime.

Mark Slifka,  Rustom Antia,  Jason Whitmire … (1998)
Conventional models suggest that long-term antibody responses are maintained by the continuous differentiation of memory B cells into antibody-secreting plasma cells. This is based on the notion that plasma cells are short-lived and need to be continually replenished by memory B cells. We examined the issue of plasma cell longevity by following the persistence of LCMV-specific antibody and plasma cell numbers after in vivo depletion of memory B cells and by adoptive transfer of virus-specific plasma cells into naive mice. The results show that a substantial fraction of plasma cells can survive and continue to secrete antibody for extended periods of time (>1 year) in the absence of any detectable memory B cells. This study documents the existence of long-lived plasma cells and demonstrates a new mechanism by which humoral immunity is maintained.