Trends in Healthcare Expenditures Among US Adults With Hypertension: National Estimates, 2003–2014 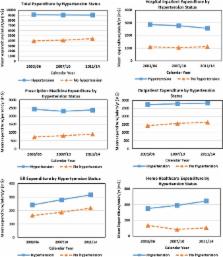 One in 3 US adults has high blood pressure, or hypertension. As prior projections suggest hypertension is the costliest of all cardiovascular diseases, it is important to define the current state of healthcare expenditures related to hypertension.

Individuals with hypertension are estimated to face nearly $2000 higher annual healthcare expenditure compared with their nonhypertensive peers. This trend has been relatively stable over 12 years. Healthcare costs associated with hypertension account for about $131 billion. This warrants intense effort toward hypertension prevention and management.

Deaths preventable in the U.S. by improvements in use of clinical preventive services.

Thomas A Farley,  Mehul A. Dalal,  Farzad Mostashari … (2010)
Healthcare reform plans refer to improved quality, but there is little quantification of potential health benefits of quality care. This paper aims to estimate the health benefits by greater use of clinical preventive services. Two mathematical models were developed to estimate the number of deaths potentially prevented per year by increasing use of nine clinical preventive services. One model estimated preventable deaths from all causes, and the other estimated preventable deaths from specific categories of causes. Models were based on estimates of the prevalence of risk factors for which interventions are recommended, the effect of those risk factors on mortality, the effect of the interventions on mortality in those at risk, and current and achievable rates of utilization of the interventions. Both models predicted substantial numbers of deaths prevented by greater use of the preventive services, with the greatest increases from services that prevent cardiovascular disease. For example, the all-cause model predicted that every 10% increase in hypertension treatment would lead to an additional 14,000 deaths prevented and every 10% increase in treatment of elevated low-density lipoprotein cholesterol or aspirin prophylaxis would lead to 8000 deaths prevented in those aged <80 years, per year. Overall, the models suggest that optimal use of all of these interventions could prevent 50,000-100,000 deaths per year in those aged <80 years and 25,000-40,000 deaths per year in those aged <65 years. Substantial improvements in population health are achievable through greater use of a small number of preventive services. Healthcare systems should maximize use of these services. 2010 American Journal of Preventive Medicine. All rights reserved.

2017 ACC/AHA/AAPA/ABC/ACPM/AGS/APhA/ASH/ASPC/NMA/PCNA guideline for the prevention, detection, evaluation, and management of high blood pressure in adults: a report of the American college of cardiology/American heart association task force on clinical practice guidelines