Health-related quality of life is not impaired in children with undetected as well as diagnosed celiac disease: a large population based cross-sectional study 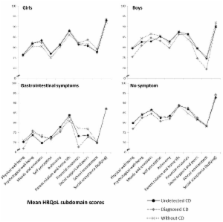 A school-based cross-sectional multicenter screening study invited 18 325 children, whereof 68% consented to participate. Participants provided a blood sample, which was later analyzed for anti-tissue-tranglutaminase antibodies, and alongside filled in a questionnaire. When anti-tissue-tranglutaminase antibodies were elevated, a small intestinal biopsy verified the screening-detected celiac disease diagnosis. Self-reported HRQoL was measured using Kidscreen, a generic 52 items instrument with proven reliability and validity. Scores were linearly transformed into a 0–100 scale with higher values indicating better HRQoL. Mean values with standard deviations (mean ± SD) were compared, and uni- and multivariate logistic regression models tested the odds of a low HRQoL among children with undetected or diagnosed celiac disease, respectively.

European Society for Pediatric Gastroenterology, Hepatology, and Nutrition guidelines for the diagnosis of coeliac disease.

Reuben R. Shamir,  M Lelgeman,  R Troncone … (2011)
Diagnostic criteria for coeliac disease (CD) from the European Society for Paediatric Gastroenterology, Hepatology, and Nutrition (ESPGHAN) were published in 1990. Since then, the autoantigen in CD, tissue transglutaminase, has been identified; the perception of CD has changed from that of a rather uncommon enteropathy to a common multiorgan disease strongly dependent on the haplotypes human leukocyte antigen (HLA)-DQ2 and HLA-DQ8; and CD-specific antibody tests have improved. A panel of 17 experts defined CD and developed new diagnostic criteria based on the Delphi process. Two groups of patients were defined with different diagnostic approaches to diagnose CD: children with symptoms suggestive of CD (group 1) and asymptomatic children at increased risk for CD (group 2). The 2004 National Institutes of Health/Agency for Healthcare Research and Quality report and a systematic literature search on antibody tests for CD in paediatric patients covering the years 2004 to 2009 was the basis for the evidence-based recommendations on CD-specific antibody testing. In group 1, the diagnosis of CD is based on symptoms, positive serology, and histology that is consistent with CD. If immunoglobulin A anti-tissue transglutaminase type 2 antibody titers are high (>10 times the upper limit of normal), then the option is to diagnose CD without duodenal biopsies by applying a strict protocol with further laboratory tests. In group 2, the diagnosis of CD is based on positive serology and histology. HLA-DQ2 and HLA-DQ8 testing is valuable because CD is unlikely if both haplotypes are negative. The aim of the new guidelines was to achieve a high diagnostic accuracy and to reduce the burden for patients and their families. The performance of these guidelines in clinical practice should be evaluated prospectively.

The Oslo definitions for coeliac disease and related terms.

Ciarán Kelly,  Knut Lundin,  M. Green … (2012)
The literature suggests a lack of consensus on the use of terms related to coeliac disease (CD) and gluten. A multidisciplinary task force of 16 physicians from seven countries used the electronic database PubMed to review the literature for CD-related terms up to January 2011. Teams of physicians then suggested a definition for each term, followed by feedback of these definitions through a web survey on definitions, discussions during a meeting in Oslo and phone conferences. In addition to 'CD', the following descriptors of CD were evaluated (in alphabetical order): asymptomatic, atypical, classical, latent, non-classical, overt, paediatric classical, potential, refractory, silent, subclinical, symptomatic, typical, CD serology, CD autoimmunity, genetically at risk of CD, dermatitis herpetiformis, gluten, gluten ataxia, gluten intolerance, gluten sensitivity and gliadin-specific antibodies. CD was defined as 'a chronic small intestinal immune-mediated enteropathy precipitated by exposure to dietary gluten in genetically predisposed individuals'. Classical CD was defined as 'CD presenting with signs and symptoms of malabsorption. Diarrhoea, steatorrhoea, weight loss or growth failure is required.' 'Gluten-related disorders' is the suggested umbrella term for all diseases triggered by gluten and the term gluten intolerance should not to be used. Other definitions are presented in the paper. This paper presents the Oslo definitions for CD-related terms.