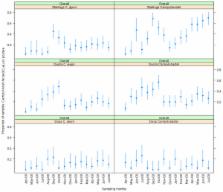 Greater attention has been given to Campylobacter jejuni ( C. jejuni) prevalence in poultry and ruminants as they are regarded as the major contributing reservoirs of human campylobacteriosis. However, relatively little work has been done to assess the prevalence in urban wild birds and pets in New Zealand, a country with the highest campylobacteriosis notification rates. Therefore, the aim of the study was to assess the faeco-prevalence of C. jejuni in urban wild birds and pets and its temporal trend in the Manawatu region of New Zealand.

A repeated cross-sectional study was conducted from April 2008 to July 2009, where faecal samples were collected from 906 ducks, 835 starlings, 23 Canadian goose, 2 swans, 2 pied stilts, 498 dogs and 82 cats. The faeco-prevalence of C. jejuni was 20% in ducks, 18% in starlings, 9% in Canadian goose, 5% in dogs and 7% in cats. The faeco-prevalence of C. jejuni was relatively higher during warmer months of the year in ducks, starlings and dogs while starlings showed increased winter prevalence. No such trend could be assessed in Canadian goose, swans, pied stilts and cats as samples could not be collected for the entire study period from these species.

This study estimated the faeco-prevalence of C. jejuni in different animal species where the prevalence was relatively high during warmer months in general. However, there was relative increase in winter prevalence in starlings. The urban wild bird species and pets may be considered potential risk factors for human campylobacteriosis in New Zealand, particularly in small children.

Campylobacter genotyping to determine the source of human infection.

Machelle D. Wilson,  Jennifer M MacRae,  Daniel Falush … (2009)
Campylobacter species cause a high proportion of bacterial gastroenteritis cases and are a significant burden on health care systems and economies worldwide; however, the relative contributions of the various possible sources of infection in humans are unclear. National-scale genotyping of Campylobacter species was used to quantify the relative importance of various possible sources of human infection. Multilocus sequence types were determined for 5674 isolates obtained from cases of human campylobacteriosis in Scotland from July 2005 through September 2006 and from 999 Campylobacter species isolates from 3417 contemporaneous samples from potential human infection sources. These data were supplemented with 2420 sequence types from other studies, representing isolates from a variety of sources. The clinical isolates were attributed to possible sources on the basis of their sequence types with use of 2 population genetic models, STRUCTURE and an asymmetric island model. The STRUCTURE and the asymmetric island models attributed most clinical isolates to chicken meat (58% and 78% of Campylobacter jejuni and 40% and 56% of Campylobacter coli isolates, respectively), identifying it as the principal source of Campylobacter infection in humans. Both models attributed the majority of the remaining isolates to ruminant sources, with relatively few isolates attributed to wild bird, environment, swine, and turkey sources. National-scale genotyping was a practical and efficient methodology for the quantification of the contributions of different sources to human Campylobacter infection. Combined with the knowledge that retail chicken is routinely contaminated with Campylobacter, these results are consistent with the view that the largest reductions in human campylobacteriosis in industrialized countries will come from interventions that focus on the poultry industry.

S F Altekruse,  N J Stern,  P. Fields … (1999)
Campylobacter jejuni is the most commonly reported bacterial cause of foodborne infection in the United States. Adding to the human and economic costs are chronic sequelae associated with C. jejuni infection--Guillian-Barré syndrome and reactive arthritis. In addition, an increasing proportion of human infections caused by C. jejuni are resistant to antimicrobial therapy. Mishandling of raw poultry and consumption of undercooked poultry are the major risk factors for human campylobacteriosis. Efforts to prevent human illness are needed throughout each link in the food chain.