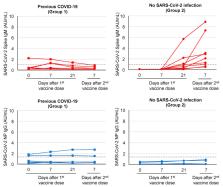 Although antibody levels progressively decrease following SARS-CoV-2 infection, the immune memory persists for months. Thus, individuals who naturally contracted SARS-CoV-2 are expected to develop a more rapid and sustained response to COVID-19 vaccines than naïve individuals. In this study, we analyzed the dynamics of the antibody response to the BNT162b2 mRNA COVID-19 vaccine in six healthcare workers who contracted SARS-CoV-2 in March 2020, in comparison to nine control subjects without a previous infection. The vaccine was well tolerated by both groups, with no significant difference in the frequency of vaccine-associated side effects, with the exception of local pain, which was more common in previously infected subjects. Overall, the titers of neutralizing antibodies were markedly higher in response to the vaccine than after natural infection. In all subjects with pre-existing immunity, a rapid increase in anti-spike receptor-binding domain (RBD) IgG antibodies and neutralizing antibody titers was observed one week after the first dose, which seemed to act as a booster. Notably, in previously infected individuals, neutralizing antibody titers 7 days after the first vaccine dose were not significantly different from those observed in naïve subjects 7 days after the second vaccine dose. These results suggest that, in previously infected people, a single dose of the vaccine might be sufficient to induce an effective response.

Jennifer Dan,  Jose Mateus,  Yu Kato … (2021)
Understanding immune memory to SARS-CoV-2 is critical for improving diagnostics and vaccines, and for assessing the likely future course of the COVID-19 pandemic. We analyzed multiple compartments of circulating immune memory to SARS-CoV-2 in 254 samples from 188 COVID-19 cases, including 43 samples at ≥ 6 months post-infection. IgG to the Spike protein was relatively stable over 6+ months. Spike-specific memory B cells were more abundant at 6 months than at 1 month post symptom onset. SARS-CoV-2-specific CD4+ T cells and CD8+ T cells declined with a half-life of 3-5 months. By studying antibody, memory B cell, CD4+ T cell, and CD8+ T cell memory to SARS-CoV-2 in an integrated manner, we observed that each component of SARS-CoV-2 immune memory exhibited distinct kinetics.

Evolution of antibody immunity to SARS-CoV-2

Charlotte Manisty,  Ashley D Otter,  Thomas Treibel … (2021)
Rapid vaccine-induced population immunity is a key global strategy to control COVID-19. Vaccination programmes must maximise early impact, particularly with accelerated spread of new variants. 1 Most vaccine platforms use a two-dose prime-boost approach to generate an immune response against the virus S1 spike protein, the titres of which correlate with functional virus neutralisation and increase with boosting.2, 3 To enable larger numbers of people to receive the first dose, delayed administration of the second dose has been advocated and implemented by some. 1 The impact of previous SARS-CoV-2 infection on the need for boosting is not known. We reasoned that previous infection could be analogous to immune priming. As such, a first prime vaccine dose would effectively act as boost, so a second dose might not be needed. To test this, we undertook a nested case-control analysis of 51 participants of COVIDsortium,4, 5 an ongoing longitudinal observational study of health-care workers (HCWs) in London who underwent weekly PCR and quantitative serology testing from the day of the first UK lockdown on March 23, 2020, and for 16 weeks onwards. 24 of 51 HCWs had a previous laboratory-confirmed mild or asymptomatic SARS-CoV-2 infection, as confirmed by positive detection of antibodies against the SARS-CoV-2 nucleocapsid (Elecsys Anti-SARS-CoV-2 N ECLIA, Roche Diagnostics, Burgess Hill, UK) or the receptor binding domain of the SARS-CoV-2 S1 subunit of the spike protein (anti-S; Elecsys anti-SARS-CoV-2 spike ECLIA, Roche Diagnostics), whereas 27 HCWs remained seronegative. A median of 12·5 sampling timepoints per participant permitted the identification of peak antibody titres in seropositive individuals while avoiding false negatives. All participants received their first dose of the BNT162b2 mRNA COVID-19 vaccine (Pfizer-BioNTech, Mainz, Germany)2, 3 and were tested 19–29 days later (median 22 days, IQR 2). Among previously uninfected, seronegative individuals, anti-S titres after one vaccine dose were comparable to peak anti-S titres in individuals with a previous natural infection who had not yet been vaccinated. Among those with a previous SARS-CoV-2 infection, vaccination increased anti-S titres more than 140-fold from peak pre-vaccine levels (figure ). This increase appears to be at least one order of magnitude greater than reported after a conventional prime-boost vaccine strategy in previously uninfected individuals. 3 Figure Serological response to one dose of the BNT162b2 mRNA COVID-19 vaccine in individuals with and without laboratory-confirmed previous SARS-CoV-2 infection SARS-CoV-2 anti-S antibody titres in individuals with no previous infection are similar to titres in individuals who have had a mild SARS-CoV-2 infection. Anti-S titres in those with previous SARS-CoV-2 infection are more than 140-fold greater than at time of peak infection. Statistical analysis was by unpaired two-tailed t test. U=unit. NS=non-significant. These serological data suggest that for individuals receiving the BNT162b2 mRNA vaccine, a potential approach is to include serology testing at or before the time of first vaccination to prioritise use of booster doses for individuals with no previous infection. This could potentially accelerate vaccine rollout. With increasing variants (UK, South Africa, Brazil), wider coverage without compromising vaccine-induced immunity could help reduce variant emergence. Furthermore, reactogenicity after unnecessary boost risks an avoidable and unwelcome increase in vaccine hesitancy. Whether enhanced vaccine-induced antibody responses among previously seropositive individuals will show differential longevity compared to boosted vaccines remains to be seen. In the meantime, our findings provide a rationale for serology-based vaccine dosing to maximise coverage and impact.